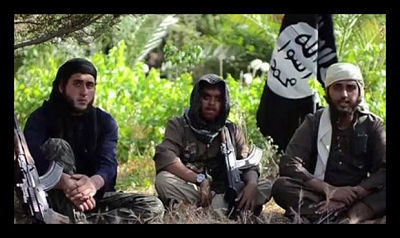 A recent video showing ISIS extremists beheading American journalist James Foley has caused global disturbance, not only because of the brutal act but also because the executioner was speaking with a British accent.

The Islamic State—deemed by several experts to be more fanatical than al-Qaeda—has been recruiting British-born militants, and it is estimated that between 400 and 500 British jihadists have traveled to Syria to fight. While dozens have been killed during conflict, half are believed to have returned to Britain.

A video released by ISIS entitled “There is No Life Without Jihad” includes testimonies by three British members. One said, “The cure for depression is jihad…. Feel the honor we are feeling, feel the happiness we are feeling.” Another maintains that jihad is an Islamic duty, and a common thread among militants is a sense of devotion to the “call of duty.” Briton Nasser Muthana elaborated on this devotion to ISIS, saying, “We will even go to Lebanon and Jordan with no problems, wherever our Sheikh (ISIS leader Abu Bakr al-Baghdadi) wants to send us.”

Even within the United Kingdom, sentiment for jihad is strong in certain communities and across social media. One British Muslim man admitted to the BBC he was planning to fight with ISIS to fulfill a religious obligation: “God has commanded for the Muslims to go and fight jihad.” He added that to die as a martyr would be a blessing and a victory, and that it would guarantee the “highest paradise.”

But there has been backlash by a majority of the British Muslim community against extremists. Mohammed Shafiq, chief executive of the Ramadhan Foundation, said Muslims condemned the actions of ISIS. He added that terrorists have distorted the tenets of Islam to justify their gratuitous violence. The Muslim Council of Britain proclaimed similar sentiments.

But how are British jihadists traveling to Syria and Iraq, and why can’t the British government prevent it? The BBC reports that most fly to Turkey and cross over the inadequately protected border into Syria and Iraq. Britons evade suspicion by claiming they are vacationing abroad or participating in humanitarian work, when in fact bogus aid agencies serve as a front to transport funds, resources and fighters in and out of Syria.

Once in the country, Britons can also meet up with organized jihadist networks that have the capacity to transport new militants to fighting zones. Traveling to Iraq and Syria remains legal, but if a British citizen is found to have joined ISIS and participated in violence he can be prosecuted and sentenced to life in prison.

A large proportion of Western jihadists report traveling to the Middle East to join more moderate Islamic groups, but then being coaxed into joining ISIS by well-funded recruiters. Extremist social media also reinforces propaganda of adventure, brotherhood, faith and a fight against injustice. In addition, once involved in a terrorist group such as ISIS, it becomes difficult to extricate oneself physically and psychologically.

Jason Burke, journalist for The Guardian, said, “The environment of a group such as Islamic State, created around a cult of extreme violence and a worldview that dehumanizes all outside the organization, can quickly turn an individual from a misguided insurgent into a pitiless terrorist killer, more than happy to execute a defenseless hostage with a knife, on camera.”

Sources: The Independent, The Week

Iraqi Christian Refugees in FranceIMHO: Seeks Accessible Healthcare for All
Scroll to top