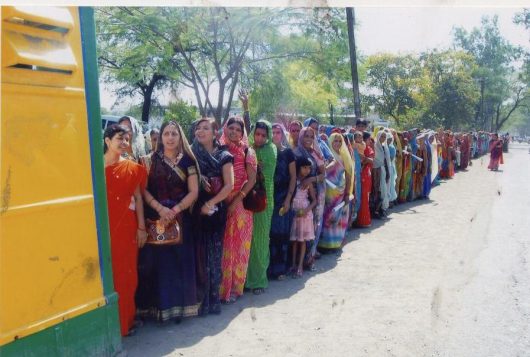 India has one of the best anti-slavery laws in the world, yet an estimated 18 million people in India live in modern slavery. This includes forced labor, sexual slavery and forced begging.

Bonded slavery in India is rampant, even though it was outlawed in 1976 by the enactment of the Bonded Labour Slavery Abolition Act. It thrives on the invisible leash of illegal financial obligations that result in a lifetime of forced labor. Whole families, including children, are forced to work for the money-lender, sometimes for generations, in an attempt to pay the debt and the exorbitant interest. Bonded slavery in India has its roots in vast inequality and extreme poverty.

Samarthan, which means “support” in Hindi, is a grassroots nonprofit organization that won the Free the Slaves Freedom Award in 2016. They fight poverty and slavery by empowering rural communities, raising awareness and providing access to essential information.

Samarthan joined hands with the BBC Media Action radio program “Majboor Kisko Bola!” (Who Are You Calling Helpless!) which aimed to help workers trapped in bonded labor by providing information about their legal rights. It is a 36-episode Hindi-language radio broadcast, each running for 30 minutes.

Samarthan spread awareness among the bonded laborers in the villages where there is no access to the internet, television or radio by using portable radios with a pen drive option. Samarthan made the effort to reach the most marginalized communities that remain isolated and uneducated, where a large number of families are under the bondage of rich farmers and money-lenders due to illegal debts.

Some of the steps taken by Samarthan include:

Samarthan has proved itself effective through its innovative approach to deal with the massive problem of bonded slavery in India. Due to the government’s failure to enforce the laws in realistic terms, the most effective solution seems to lie with passionate groups like Samarthan who are willing to support the forgotten slaves in the booming economy of India.