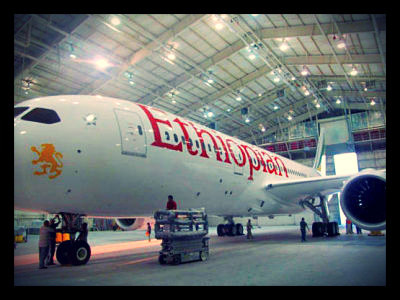 Airline CEO Tewolde GebreMariam is helping his company use its impressive economic growth and its strategic location to its advantage. Ethiopia is located in the middle of the developing world. However, if the airline is to be successful with their Boeing endeavor, they will need to deal with the economic stress of being an airliner in Africa.

The airline needs to combat a poor African airline infrastructure. Additionally, Ethiopian airlines will need to invest in the education and training of their pilots and technicians. GebreMariam has answers for these problems. He says Ethiopian Airlines is working with African governments to improve airport infrastructure. Ethiopia, he says, is building a huge aviation academy that has grown to 1000 graduates a year. He is confident that the airline can give an opportunity for the country.

GebreMariam believes the new airliner has a great deal to offer passengers as well. He boasts the more humid air on the aircraft, wider windows allowing passengers to take in more scenery, and better fuel efficiency, all of which he hopes will increase business to the airline.

GebreMariam believes the airline can generate over ten billion dollars annually in revenue citing Ethiopia’s growing GDP as one of the world’s fastest-growing economies. He expects its growth to continue because of its strategic location. Economies such as China, African economies, India and Brazil are all growing economies, and GebreMariam believes he can use the Boeing Dreamliner to help boost Ethiopian Airlines’ profits with customers from those countries.

The Boeing Dreamliner will fly in Africa for the time being. When they are able to purchase a second Dreamliner, GebreMariam says Ethiopian Airlines will utilize it on the Washington route.  They have already ordered ten Boeing Dreamliners and are expecting to have four of them delivered by year-end.