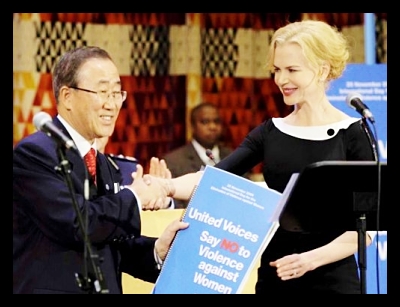 Nicole Kidman has a history of being involved in philanthropic endeavors with dual citizenship in the United States and Australia. In January of 2006, Kidman took on the role of goodwill ambassador of the United Nations Development Fund for Women, also known as UNIFEM, and now called UN Women.

Kidman works primarily towards raising awareness on the infringement of women’s human rights around the world with her main focus on violence against women. According to the UN, violence affects nearly one in three women around the world.

Kidman has been particularly involved in UN Women’s Say NO- Unite to End Violence Against Women Initiative. This initiative has become a global advocacy effort that has galvanized millions on the issue. Additionally, she has worked to make the voices of women survivors of violence heard in the media and has helped to raise funds for programs addressing violence against women.

Kidman’s philanthropic work does not stop with UN Women. She has also done a great deal for UNICEF serving as the UNICEF ambassador for Australia. Kidman has also served as a patron of the Australian Theatre for Young People in Sydney, Australia. Over the past three years, she has also served as an honorary patron of FARA, an organization working to help orphaned children in Africa. In the United States, Kidman has also advocated for women’s cancer research, recently becoming the first chair of the Women’s Health Fund at UCLA.