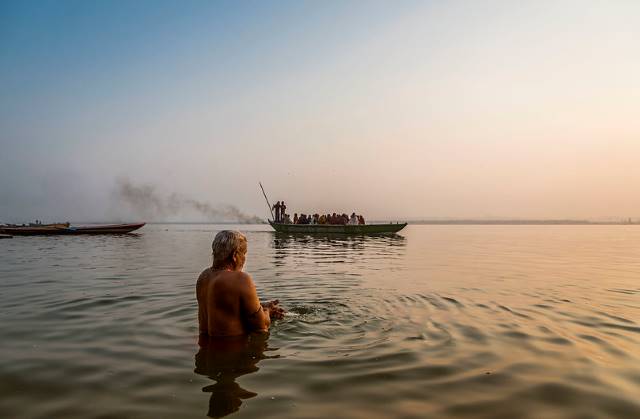 The Ganges River is filled with dead bodies and lined with shallow riverside graves that dogs often dig up. According to estimates, people dug 4,000 graves along just one mile of the Ganges riverbank in Uttar Pradesh between mid-April and mid-May 2021. Families of the dead float their lost loved ones’ bodies in the Ganges or bury them on the riverbank because they cannot afford cremation, especially in the impoverished rural states of Uttar Pradesh and Bihar.

Cremation for non-COVID-19 deaths in India generally costs around 5,000 rupees, but crematoriums have raised prices for those who have died of COVID-19 to around 22,000 to 30,000 rupees. Because of the high cost of cremation, many people living in poverty are submerging their lost loved ones in the river or resort to burying bodies on the shore.

Traditionally, Hindus in India float certain bodies in the Ganges, including those of people who die of infectious diseases. Now, though, with the COVID-19 crisis causing cremation costs to soar, people are disposing even more bodies than usual in the Ganges.

Some worry that the bodies in the Ganges could spread COVID-19. Experts say that the dumping of bodies may not lead to increased COVID-19 cases, but could lead to other infections from polluted drinking water. However, the Jal Shakti Ministry, an Indian government ministry focused on water, claims that the bodies have not polluted the river.

Nevertheless, fear of poor water quality and coronavirus spread has led to declining fish sales. One fisherman said, “So far we have lost Rs 50,000… No one is buying fishes because of fear.” There is no evidence that COVID-19 can spread through the consumption of fish and the only carnivorous fish in the Ganges are illegal to catch. Still, some are refusing to eat fish from the Ganges. The greater danger, though, is that the Ganges provides water for drinking, bathing and irrigation for more than 400 million people.

In response to the crisis of bodies in the Ganges, India’s National Human Rights Commission (NHRC) has called for legislation addressing the dignity and rights of the dead. It has given 11 recommendations:

India’s Central Pollution Control Board (CPCB) is monitoring the Ganges and its tributaries closely, liaising with state and local health departments as well as pollution agencies. After the Jal Shakti Ministry asked that governments ensure the proper disposal of bodies, the Bihar government is taking action. The National Mission for Clean Ganga (NMCG) has also asked authorities to properly dispose of unidentified bodies and to detail the actions taken in submitted reports. The Indian government has also installed a net to catch the bodies in the Ganges.

Along with preventing the dumping of bodies in the Ganges, state agencies must prevent citizens from burying bodies in riverbanks, support cremation and provide education on the proper use of river water.