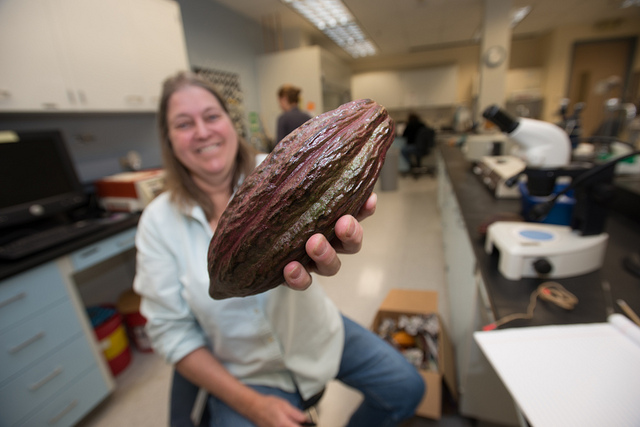 Blockchain technology has the potential to improve a plethora of industries including agriculture. Blockchain deals with cryptocurrency, like bitcoin, but instead of being limited to just digital cash it offers a large secure database as well. This database includes ledgers of transactions and accounts, which gives farmers secure records and eliminates the need for middlemen such as banks or brokers. This data can either be rejected or approved, but once approved it is available to all levels of the blockchain. This technology is extremely difficult to hack or alter and has a relatively low maintenance cost.

Although blockchain alone does not have the power to massively increase profits for farmers, it provides a digital infrastructure that includes tracking and automation. In the case of farming, blockchain not only records transaction ledgers but also lists data such as soil moisture, seed quality, demand and sale date and more. This clarity and immediate access to information allow farmers to market themselves and sell crops for their actual worth rather than a lower cost. By eliminating the need for a middleman, blockchain has the potential to connect farmers directly to consumers and retailers.

In Ecuador, the FairChain Foundation, a nonprofit to aid business in the developing world, has attempted to implement blockchain technology in cocoa farming. This company aims to drastically change the farming market and pay farmers the actual value of their crops. The ability to document crops allows Ecuadorian farmers to record cocoa bean volume and be able to see the status of their crops from harvest to delivery. FairChain is attempting to use blockchain technology to develop a chocolate bar using cocoa beans from sustainable Ecuadorian farmers that practice zero deforestation in the Amazon.

In Haosheng village, Wenchang city, the mayor has decided to develop its rural areas through aerospace technology. The village has also implemented blockchain agriculture along with space technology to streamline its farming production. The use of this technology has allowed the farmers of this region to unify making both payment and improvement easier. Blockchain agriculture has greatly improved the quality of life in this area and Haosheng even has a blockchain restaurant that uses the technology to track crops from harvest to table. The use of this blockchain restaurant ensures the quality of the produce and allows farmers to market their crops accordingly.

Blockchain technology has proven extremely valuable in the areas it has been implemented. In both Ecuador and China, it has had the ability to make agriculture productive and profitable. It not only has validity as a cryptocurrency but can be carried out in a number of other industries other than agriculture. With blockchain technology, farming could step out of being seen as a low-income profession and become something that can provide a livelihood for people in rural areas.

The U.N. and Distribution of International Aid Funds Top 10 Facts About Life Expectancy in Somalia
Scroll to top