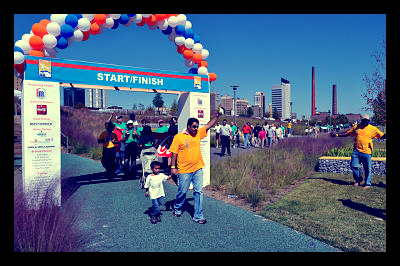 On September 22, 2013, over 2,200 people participated in the Birmingham Partnership Walk in order to raise awareness and money for those around the world living in poverty as well as the organizations that are pledged to help them.

The partnership walk was held at the city’s Railroad Park, and hosted a 5K run, a 1K youth run, a 100-yard dash, and a 3K family walk. Attendees could partake in these events while various groups, such as local marching bands and choirs, entertained the participants. Last year, 1,950 people participated in the partnership walk, raising $300,000. This year’s walk matched that goal.

The annual paternship walk is an event conducted by Aga Khan Foundation USA (AKF USA), which conducts similar Partnership Walks in 10 other cities around the United States. Aga Khan Foundation USA is a nonprofit humanitarian organization that focuses on agriculture, education, healthcare and other forms of development in Africa and Central Asia. All of the money raised at the walks organized by AKF USA goes to fund projects that directly battle global poverty.

Volunteer organizer Salima Mulji remarked that people should consider themselves part of a single global community, and, as such, it is the responsibility of everyone to help those in need. As a native resident of Southeast Asia, Mulji knows the advantages of growing up in the United States. Volunteering with AKF during the partnership walk is her way of giving back.

The Side Effects of Not Knowing What is Corporate Social Responsibility?
Scroll to top