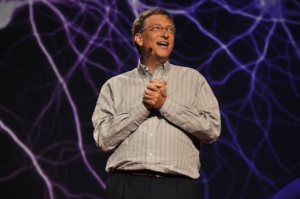 US foreign aid has recently been thrown into the debate of where to cut government spending. Many Members of Congress have expressed doubt as to the effectiveness of foreign aid and the United States’ responsibility of providing foreign aid to third world countries. In his annual letter, Bill Gates wrote a response to these many concerns asserting that foreign aid works and the United States should continue funding this vital program.

Bill Gates begins his argument by addressing concerns that foreign aid is ineffective and only goes into the hands of the corrupt. By using the example of an organization he supports, GAVI Alliance, Gates is able to explain the specifics of foreign aid in a way that is often ignored. GAVI uses all of the donations it receives to provide vaccines to developing countries. Gates reiterates that the organization does not send cash to these countries, only vaccines. This is one way nonprofits and USAid can bypass possible corrupt political leaders.

Another way GAVI ensures its funds are not wasted is by only operating in countries that have provided evidence of a strong enough immunization system to administer the vaccines to a majority of children. These countries are required also to pay a percentage of the cost of the vaccines. Gates reminds us that China was once a recipient of such aid and now pays the full amount for vaccines. He also stresses how methods for measuring accountability and effectiveness have greatly increased and countries failing to meet certain criteria no longer receive assistance.

Not only are assistance organizations addressing corruption and government accountability, but studies have also shown these organizations to be achieving their goal of reducing global poverty and hunger. GAVI has contributed to the decrease in children dying each year (down by one quarter) by providing 370 million children with vaccinations. That means 2.4 million children’s lives have been saved in about thirteen years, since GAVI was created in 2000.

Gates acknowledges that there is still some corruption when dealing with foreign aid, but that does not mean the US should stop sending assistance. Foreign aid is working, and eventually recipient countries will build their economies to the point where they no longer require aid. The implications of such development mean a larger market for US products and a more secure world, not to mention drastically better living standards for formerly impoverished people.

Bill Gates calls for US politicians to be the moral leaders of the world. Such actions will not only ensure international respect but also international influence. He urges the US to follow the example of Britain and other countries devoted to foreign aid and continue funding for foreign assistance programs.