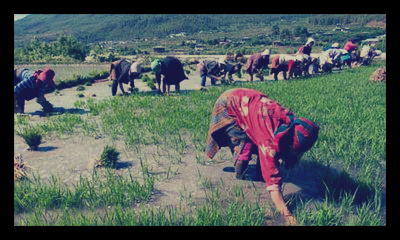 Bhutan is set to become the world’s first entirely organic country in terms of farming and agricultural practices, as all synthetic fertilizers and pesticides have been banned by the government. Farmers will have to rely on all-natural forms of fertilizers, mainly animal waste and other farm waste by-products.

The government of Bhutan hopes that instead of limiting the country’s agriculture, the ban on pesticides will increase farming and enable more food to be produced, including specialty foods with demand from neighboring countries such as China and India.

Bhutan’s minister of agriculture and forests, Pema Gyamtsho, asserted that the topography of the country played a large role in the decision, citing terrain issues with using synthetic pesticides, including uncontrollable run-off that has a negative effect on plants and animals in the vicinity.

Although Bhutan has only recently seen a boom in development and current technologies reaching citizens, the government is confident that going organic will not only protect the country from future climate change implications but also from an economic standpoint in hopes that the amount of food they will have to import will remain minimal.

Some farmers in Bhutan have expressed their doubts about the plan, citing recent low crop yields due to nontraditional high temperatures and an increase in invasive pests, creating a need for more synthetic fertilizers.

Although the use of pesticides and synthetic fertilizers are mostly widespread currently, Bhutan as a whole is an extremely sustainable nation: over 95% of the country “has clean water and electricity, 80% of the country is forested and, to the envy of many countries, it is carbon neutral and food secure.”