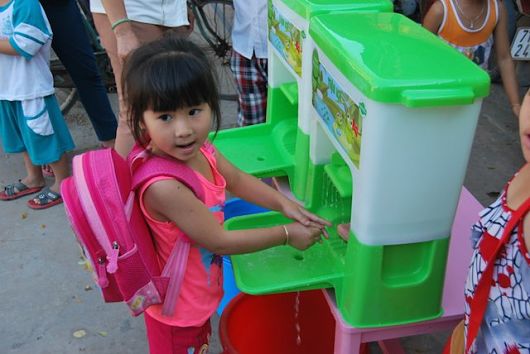 Parents know that it can be difficult to get their child to wash their hands or brush their teeth. Sometimes, to get kids to do what is best for them, you have to make it fun.

A new toy can help prevent children from getting sick with diseases or diarrhea. It is a bright green and white plastic box that has frogs and a colorful logo on it.

LaBobo is the newest toy sink produced by nonprofit WaterSHED. It has been launched in Cambodia, where access to basic hygiene and sanitation needs ranks last in Southeast Asia and 110th in the world, contributing to the deaths of 10,000 children per year.

The World Health Organization (WHO) reports that nearly 800,000 children die every year from lack of sanitation, which leads to diseases.

LaBobo sells the frog toy sink at $15, making it a very affordable product, and the sink dispenses 15 liters of water. Instead of giving out buckets and soap, WaterSHED takes an innovative approach to helping solve sanitation problems in developing countries.

“If you give people a bucket and a piece of soap, more often than not you will find the bucket ends up being used for something else,” says Geoff Revell, WaterSHED’s regional program manager.

In one year, WaterSHED has sold 10,000 units in Cambodia. Regular hand-washing and sanitation is a significant challenge in Cambodia, where only 44 percent of Cambodians are able to wash their hands with soap and 60 percent of the rural population defecate in the open.

WaterSHED is working on marketing tools to bring LaBobo to Vietnam, which also has low sanitation standards.

In places like Niger, where only 18.3 percent of the population has access to improved sanitation facilities, there needs to be stronger commitments from the international community to ensure that residents can access proper sanitation.

Diseases are a cross-national threat. But by investing in sanitation facilities and innovative ways to improve children’s sanitation, the large number of deadly diseases these children could become afflicted with can be reduced.

World Food Program Shifts to Recovery Efforts in Nepal What is the Impact of Obama’s Trip To Kenya?
Scroll to top