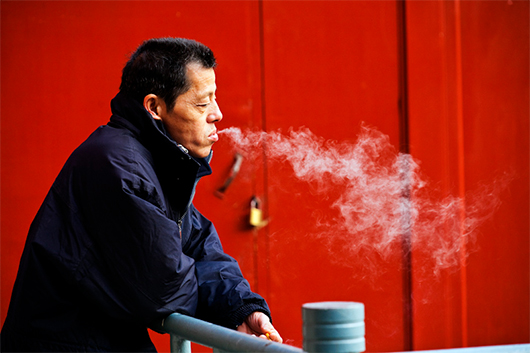 Though the June 1st ban on smoking wasn’t the first of its kind in Beijing, it may be one of the most effective. The ban comes at a time when China has the highest number of male smokers. It is estimated that one-third of all cigarettes sold globally are produced by China National Tobacco Corporation, with 43% of tobacco produced in China.

The high rates of smoking in China, and in particular Beijing, are especially concerning. About 60% of male doctors smoke and few associate the habit with health problems other than vascular ones. Without the widespread knowledge and dissemination of the risks associated with tobacco smoking, people often have little incentive to stop.

China’s smoking problem is also largely a cultural one, concentrated in masculinity. While an estimated 45% of men smoke, only about 2.1% of Chinese women do. However, when looking at the plethora of health problems that stem from smoking, men, women, and children are all affected. The high volume of smokers combined with the thick covering of smog cloaking entire cities creates a pocket of pollution where the effects of second-hand smoke are exacerbated.

The latest ban introduced in Beijing bans all smoking in indoor places with an added level of severity-fines. People who act against the ban are subject to fines of $32 and businesses that allow people to smoke on their premises will be fined $1,600. In the past two months, about $16,000 has been collected in fines from the ban, but in the coming months that amount may rise. The Beijing Municipal Commission of Health and Family Planning has discussed the possibility of increasing fines for individuals to $800. What’s more is that any person who violates the law three times is subject to being publicly named on a government website, a clause that aims to shame.

Upon the initial implementation, support was strong and people seemed excited. However, as is the case with most past similar bans, the popularity fades and as the attention slips away so does the people’s enthusiasm and commitment. On the contrary, this particular ban has shown more promise. Almost two months post-implementation, the ban still sees support from pop culture icons and a visible decline in indoor smoking. With Beijing getting a little extra focus from the Chinese government for being the capital, perhaps this particular ban will see greater success than past ventures. If the abstinence continues, Beijing will be able to serve as an example to other cities around the country, and the overall rate of smoking will likely decline.

Although such a decline in vast numbers of Chinese smokers will affect the nation’s economy slightly, the overall benefits to health seen in both men and women will create a healthier working class that will reciprocate any losses by boosting the workforce and spending. Also as smoking rates decline, women will face fewer health risks imposed by their male counterparts, which will make for a more fair environment for women, although China continues to struggle in gender equality, it is a step. Like all newly implemented programs and policies, the ban can only restrict smoking so far, but it is a very positive step for Beijing and for China. In order for China to fully reap all of the rewards from smoking reduction, a cultural change is needed, which is often times the harder of the two to enact.

The Modern Slavery Act and What It MeansHealthcare Workers: The Key to Health Progress
Scroll to top