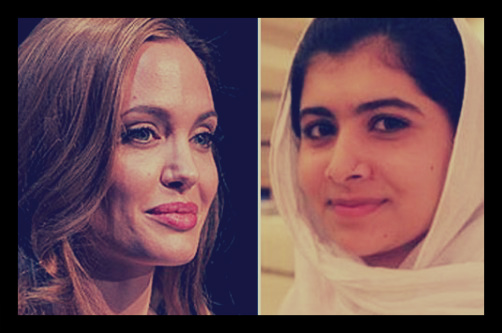 At the Women in the World Summit earlier this week, Angelina Jolie paid tribute to Malala Yousafzai, a young Pakistani girl who was shot in the head by the Taliban in October because of her activism on educating girls and women. Jolie also pledged $200,000 to an educational fund that will provide money to build a girls school in Pakistan.

The Malala Fund, which will be directed by the girl, is set to build a school large enough for 40 girls to attend. In a video played at the conference, Malala told the audience that she hopes the 40 girls educated at her namesake school will turn into 40 million girls, and said it was the “happiest moment of her life.”

In her tribute to Malala, Jolie told the audience of her story and how the Taliban set out to silence Malala and her message, but only “made her stronger.” Other stars to appear at the Women in the World conference include Oprah Winfrey, Meryl Streep, Barbara Walters, and Eva Longoria. Christiane Amanpour was also in attendance and moderated a panel on “The Next Generation of Malalas,” where she spoke to two young Pakistani girls also advocating for girls’ education.