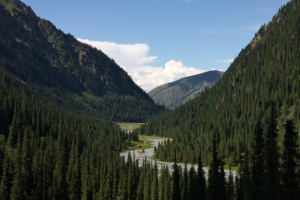 Kyrgyzstan is a mostly mountainous country situated between Kazakhstan and China. Its population is mostly Kyrgyz, with an Uzbek minority. Most of the population lives in the flatland regions, with only sparse settlements in the mountains themselves. The country also ranks as one of the poorest countries in the world, with numerous contributing factors to its low GDP, including the agriculture sector in Kyrgyzstan. Since leaving the Soviet Union, Kyrgyzstan has lacked a reliable source of resources and funds beyond their own borders; and despite trade, they struggle economically with exports.

Compounding poverty, the agricultural sector of Kyrgyzstan also remains underdeveloped despite the nation’s progress. Despite accounting for 40 percent of the country’s labor force, agricultural workers experience widespread poverty and food shortages, especially those living in rural areas. The lack of progress and modernization in this area is coupled with a combination of economic weakness and lack of oversight from a shifting government to create a stagnant environment. However, the aid programs discussed below are boosting the agricultural sector.

Agriculture in Kyrgyzstan is mostly a local affair. Families grow food for themselves in what is called “sustenance farming.” Large-scale commercial farming is still small compared to similar operations in other countries. Despite this, several foreign aid programs have been implemented to improve the agricultural sector.

IFAD is an organization dedicated to helping rural communities in developing nations. Through low-interest loans and investments in helping poor households and communities, they help spur growth in these sectors and countries. In Kyrgyzstan, they focus specifically on improving livestock productivity and improving livestock farmers’ access to better markets.

The funded programs provide training in techniques for rural farmers while guiding them to better markets. These programs teach better business practices, which leads to greater earning potentials for families. Finally, natural disaster insurance is also provided for these same households and communities, protecting families against extreme weather.

One of two major agricultural endeavors in Kyrgyzstan, the Farmer-to-Farmer project was a program implemented over five years, finishing in 2018. Similar to IFAD, the program focused on families and communities who relied on small farms and agribusinesses for income. This included providing agricultural training to improve yield as well as business training to improve market reliability and profit. Without proper training, small farming businesses often yield small quantities of product not enough to constitute “food security.”
By the time the program was complete, 21 agricultural education assignments were completed. These included the education of local businesses – leading to newly established guidelines and quality standards for food – as well as students and graduate students of agriculture. The program reached a total of 4,320 recipients, with 3672 successfully trained.

The other major agricultural endeavor of USAID in Kyrgyzstan, Agro Horizon, is still ongoing. Partnering with several corporations, Agro Horizon has provided over $30 million dollars in aid. The focus has been on the commercialization and industrialization of Kyrgyzstan’s agriculture in an effort to make it more profitable.
The program’s investments have taken several forms, both in modernizing production and processing methods, as well as grants and training opportunities for over 100,000 households. Thanks to a partnership with a local agricultural producer, the first commercial-scale production of safflower seed was launched. Similarly, the first Kyrgyz modern slaughterhouse following international standards was established. The program has already helped establish 1,200 jobs providing more stable income than previous.

There are still many opportunities to improve agriculture in Kyrgyzstan. Areas of untapped potential and continued aid stand to make agriculture in the country not just sustainable, but profitable. So long as aid for the agricultural sector in Kyrgyzstan continues, Kyrgyztan’s agriculture sector might be able to pull itself up from its current state.