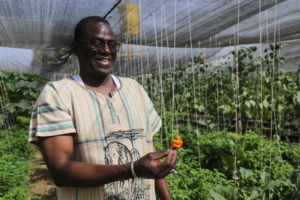 Mali is a subsistence farming-based economy in West Africa. Approximately 80 percent of the population works in the agriculture industry, yet low productivity, natural disasters and poor crop yields prevent many Malians from rising out of poverty. The 40 percent poverty rate includes farmers that rely on outdated farming techniques for their livelihoods while also depending on favorable crop prices that fluctuate based on Mali’s fragile economy. Since agriculture is the main industry, USAID and the World Bank are working towards agricultural development in Mali.

The main crops in Mali are cotton, corn, cereal, peanuts and tobacco. It exports cotton to neighboring countries like Senegal on the Ivory Coast, and various types of cereal remain important due to their ability to withstand droughts. Since the Sahara Desert covers the northern portion of Mali, it is difficult to find suitable land for farming and livestock. Most farmers rely on the Niger River and its surrounding area for fertile land, as about 65 percent of the country is desert or semi-desert.

Mali cultivates less than 5 percent of its land, yet almost half of its GDP is from agriculture. Most of the cultivated land involves various types of cereals, such as sorghum and millet. One issue that affects the agriculture sector in Mali is desertification, which overgrazing livestock, droughts and deforestation can cause. Farmers rely on rainfall, yet rainfall in Mali is rare and droughts are common. Since the agriculture sector in Mali remains the most important industry for the majority of Malians with more than 40 percent of its GDP comprising of the agriculture sector, further agricultural development in Mali could benefit its people and economy by increasing income and reducing poverty.

As part of its strategy to end world hunger, the U.S. Government’s Feed the Future initiative in Mali focuses on cereal for food security and poverty reduction, as well as rice production to improve income and livestock for food security and another source of income. To date, the Feed the Future initiative has benefitted approximately 500,000 Malians. In 2019, USAID used two methods as part of its Fertilizer Deep-Placement Micro-Dosing. This project aims to improve crop production through fertilizer deep placement and micro-dosing technology. More than 453 jobs emerged in rural areas due to the success of the two productivity methods.

Nah Drame benefitted from the project in the Mopti region after receiving training on fertilizer, irrigation, sowing, land preparation and harvesting. She replicated what she learned on her own five-acre farm. Production and income increased so much that she expanded her farm to 12 acres and hired three employees to help with her expansion. Drame used some of the money she earned to buy clothes and school kits for her grandchildren. She also used the money to help her daughter start a business of her own, and it was all thanks to USAID’s involvement in the agriculture sector in Mali.

The World Bank’s $150 million Fostering Agricultural Productivity Project for Mali began in 2010 with the goal of improving productivity and crop yields. The project proved successful as crop yields increased from 27 million pounds in 2016 to 34 million pounds in 2018. The project also benefitted 668 farms and 4,300 producers in Sabalibougou, and it developed more than 6,600 acres of land for agriculture in M’Bewani and Sabalibougou.

USAID, the World Bank and various other organizations are continually working towards agricultural development in Mali. Economic development is slow, yet improving income for millions of farmers in Mali could help reduce poverty and develop the economy. If more Malians like Nah Drame obtained training on improved farming techniques, an even greater impact could take place, as increased income would help millions afford better education, health care, necessities and many other things that those in developed countries often take for granted.