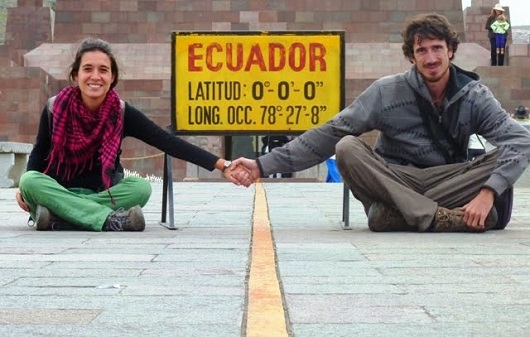 Traveling the world since 2005, Acrobats of the Road Juan Villarino and Laura Lazzarino have enacted their Educational Nomadic Project in communities all over South America, southern Asia, Europe and the Middle East. The project is dedicated to documenting and spreading world hospitality to help overcome social issues domestic to different regions.

Juan Villarino is a writer and photographer originally from Argentina who has spent the majority of his life traveling the world and writing about the people he has met. Laura is a nomad who spent much of her youth traveling solo through South America, Western Europe and southern Asia. The pair met while abroad, and after traveling for a few years, they decided to team up and start Acrobats of the Road.

For each community the group impacts, Villarino self-publishes a book to inform readers about the importance of hospitality and social justice in rural villages throughout the world. His most recent book, Hitchhiking in the Axis of Evil, was picked up for proper publication and will be distributed internationally. The book follows Villarino’s journey through Iraq, Iran and Afghanistan and his contributions to increasing social justice in communities affected by war.

Acrobats of the Road have traveled to over 60 countries, crossing more than 1,500 borders and travelling over 160,000 kilometers. Throughout their journeys, they have stayed in monasteries, hostels, campgrounds and with locals. These experiences have allowed them to encounter firsthand the generosity that inspired them to create Acrobats of the Road.

For their Educational Nomadic Project, Villarino compiles slideshows of photographs and the pair present lectures and workshops on a variety of topics including the intrinsic goodness of human beings, community involvement and cooperation. In collaboration with the People’s Health Movement, the pair travels with a projector to teach to these communities.

While travelling, the duo has received a lot of love and care from people of many races, religions and backgrounds, and the project focuses on giving back to those who have helped them along the way. The project was started in 2009 and has been used to spread empathy and care. Villarino’s photographs capture the everyday life, kindness and cultures of communities he has encountered while hitchhiking. Acrobats of the Road hopes that with this project, they can promote equality and happiness and show that the world can become a more harmonious place.