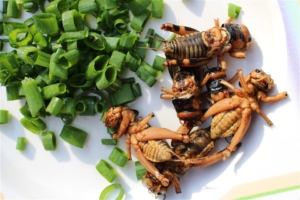 In 2013, the United Nations reported that eating insects could reduce world hunger and food insecurity.

Eva Muller, a Director of Food and Agriculture Organization (FAO) says, “Insects are not harmful to eat, quite the contrary. They are nutritious, they have a lot of protein and are considered a delicacy in many countries.”

In fact, scientists have discovered over 1,900 edible insects. Some of these include beetles, wasps, caterpillars, grasshoppers, worms and cicadas. Scientists also claim that insects have more protein than beef and other meats.

Insects may also be better for farming than pigs and cows. Not only are insects easier to raise, but they also require less water, feed on waste materials, and produce less greenhouse gasses than cows and pigs. Insect farming could even provide income-generating opportunities for people in rural areas, which ultimately could decrease poverty and end world hunger.

After the report was published, Muller said, “Consumer disgust remains one of the largest barriers to the adoption of insects as viable sources of protein in many Western countries.”

Daniella Martin, author of the blog Girl Meets Bug, says, “At any angle you look at it, insects have the advantage. They’re ecologically sustainable, use fewer resources and are a high-protein option. It’s also cleaner than livestock.”

Insect recipes are proving to be incredibly trendy, but most importantly, accepted by consumers.

With this in mind, perhaps more researchers can perfect technologies to grow insects in large numbers to feed people all around the world.

Bugs can do more than save the lives of the hungry, but can also conserve our planet.