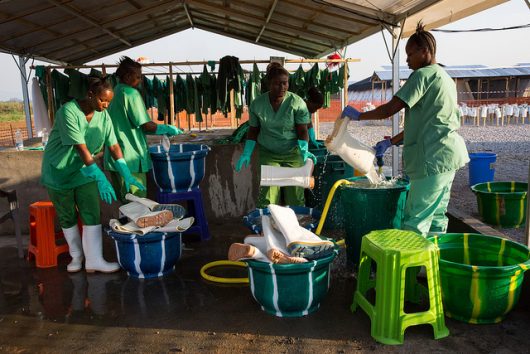 As poverty is addressed around the world, there is a need for people in all kinds of specialties but especially the medical field. Médecins Sans Frontières (MSF), also known as Doctors Without Borders, is an international medical humanitarian organization helping people from over 60 countries threatened by violence, conflict, neglect, natural disasters, epidemics, health emergencies and exclusion from healthcare.

They address areas where the need is greatest, unbiasedly delivering emergency medical aid. There have been many accomplishments of Doctors Without Borders, but here are three of their most recent projects:

Doctors Without Borders constructed a new hospital in Tasnimarkhola camp, Bangladesh in three weeks. The hospital has an emergency room, an intensive care unit, a pharmacy and sterilization unit. In its first month of operation, MSF staff admitted 220 patients with more than half needing treatment for measles.

MSF provided medical assistance to refugees and migrants in the central Mediterranean. At sea, the search and rescue vessel Aquarius — run by MSF in cooperation with humanitarian organization SOS MEDITERRANEE — rescued 3,645 people and brought those rescued to ports of safety in Italy.

Doctors Without Borders also provided psychological first-aid after tragic rescues while also running several mental health and healthcare projects in Sicily. In Libya, the MSF teams provided medical assistance to refugees and migrants that were arbitrarily held in detention centers nominally under the control of the Ministry of Interior.

3. Treatment of War-Wounded People in Taiz

These three specific accomplishments of Doctors Without Borders are some of many; the staff continuously works hard, laborious hours to save the lives of those affected by poverty.

War, disease and lack of resources are major contributing factors of poverty, and Doctors Without Borders have been able to impact these areas beyond its immediate activities, reaching populations or developing the use of practices in ways that have far-reaching and lasting consequences (see MSF-USA’s 2012 Annual Report).

The accomplishments of Doctors Without Borders are so powerful because so many people are committed to addressing the great needs of poverty and bringing hope to those around the world.