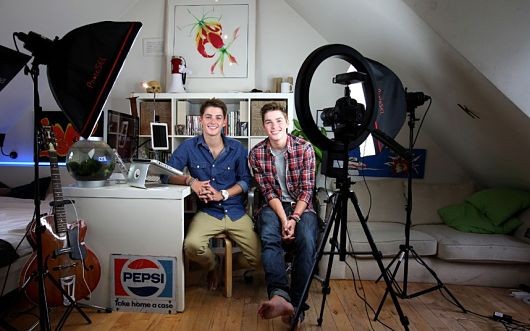 YouTube has become one of the largest, most influential mediums in the world. According to the website, YouTube has more than one billion users in 75 countries, watching hundreds of millions of hours each day.

More than one million channels receive proceeds from their videos due to the YouTube Partner Program, and a small amount of these channel owners make six figures per year.

Elite YouTubers Zoella, Jack and Finn Harries, and Hank and John Green are a part of the select group who achieved super-stardom from their videos.

However, these YouTubers have more than just a high-paying salary in common. They all participate in numerous charities to give back to those who are struggling.

With about eight and a half million viewers subscribed to her fashion and beauty blog, Zoe Sugg, also know as Zoella, donates some of her time to raising awareness for fatal diseases. Sugg starred in “The Comic Relief Bake Off” in February that funded vaccinations for babies in Uganda. Sugg has also worked with Trekstock, which gives support to young adults with cancer.

“Doing what I do, I get to meet a lot of young people that have been through the stresses and the traumas that go with [cancer],” Sugg said.

Along with this, Sugg is the first digital ambassador for Mind, a mental health charity and has participated in fundraising for the Stroke Association and Band Aid 30.

Identical twins Jack and Finn Harries run the YouTube channel JacksGap that has more than 180 million views. The channel’s videos feature the brothers traveling the world, occasionally stopping to film a video for charity. In March of 2013, the twins posted a video about their time in South Africa visiting some Comic Relief projects. More than five million people live with HIV in Africa, according to the video.

“We were shocked to hear how serious the issue had become, but excited to see what was being done to help and meet the people behind the project,” Jack Harries said.

Jack and Finn Harries have helped raised awareness for this issue, because their video now has over two million views.

Another set of philanthropic YouTube siblings with the channel name VlogBrothers hold an online presence of about two and a half million subscribers, and they use this power to promote their charity projects. Hank and John Green created Project for Awesome in 2007.

“During Project for Awesome, thousands of people post videos about and advocating for charities that decrease the overall level of world suck. As a community, we promote these videos and raise money for the charities,” Hank and John Green said.

The charity has taken place for seven years, and last year, the project raised over one million dollars.

Aside from this success, the brothers have also taken part in Partners in Health.
For more information about these YouTubers, visit youtube.com/zoella, youtube.com/jacksgap, and youtube.com/vlogbrothers.