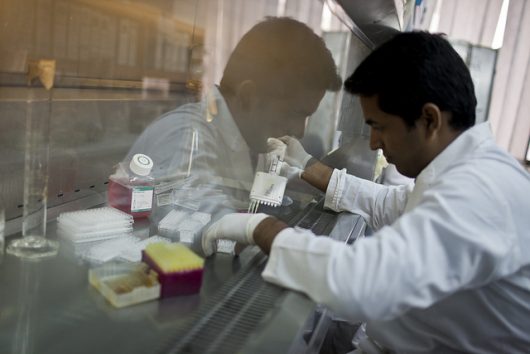 Bangladesh is an impoverished country, yet in recent years, its healthcare has steadily improved. Despite being much poorer that Pakistan, India and Nepal, it has the lowest infant and child mortality rates, the highest vaccination rates and the farthest-reaching family planning.

However, even with the magnificent progress made by private medicine companies and NGOs over the past few decades, there are still many diseases that people in Bangladesh have to struggle with. The five categories below are a sample of various common diseases in Bangladesh and how people are working to prevent and treat them.

Diarrhea is a common and often dangerous condition for many in Bangladesh.  The dangers are especially true for young children. Though diarrhea is sometimes a symptom of more serious issues, diarrhea itself can be caused by diseases like cholera that are a result of poor water and sanitation.

Better knowledge about the dangers of contaminated water along with increased access to safe water and proper sanitation can prevent the spread of these bacteria. For those already afflicted, oral rehydration therapy helps reduce dehydration and prevent further sickness or death.

Tuberculosis (TB) is rare in developed countries, but developing countries like Bangladesh still report large numbers of TB. In 2010, TB accounted for three percent of the country’s total deaths that year. The CDC and other organizations work on improving prevention, infection control, and treatment, though multi-drug-resistant strains have made the treatment of TB much more challenging.

Doctors in Bangladesh have found a much shorter and more efficient method of treating multi-drug-resistant strains using a method now named the Bangladesh Regimen. This regimen results in almost 88% cured compared to the usual 11 to 79%. Though the treatment is still in the first decade of use, the results show a marked improvement, and it is an exciting step in treating TB in Bangladesh and in other countries.

High immunization coverage decreases the rate of infection, but the lack of treatment due to ignorance is one of the main reasons that respiratory infections cause so many deaths. Only 37% of children are taken to a health care provider when they show symptoms of pneumonia, so increasing health awareness and education is a crucial step to reducing deadly respiratory infections.

Preterm birth complications and neonatal encephalopathy (commonly known as birth asphyxia) are two common diseases in Bangladesh that center around infancy. Together, these two diseases made up 7% of deaths in 2010. About 28,000 babies in Bangladesh will die the day that they are born. However, many of these deaths could get prevented with better prenatal and postnatal care. Improving medical facilities and making them more accessible to everyone, especially those in rural areas, will help more babies survive and live a healthy life.

Various heart diseases are the leading cause of death when examined as a group, including Chronic Obstructive Pulmonary Disease, Ischemic Heart Disease, and stroke. Combined, they were responsible for 18% of deaths in 2010, which indicates that heart disease is a serious issue in Bangladesh.

Though heart conditions are common in many countries, they occur in Bangladesh on average ten years earlier than in most countries, with 40% of cases in people less than 50. Some causes of Bangladesh’s heart diseases are relatively standard. Consuming a large amount of rice, sugar, and fish was linked to higher rates of heart attacks and 80% of heart attack patients use tobacco.

Recent research has shown that arsenic, copper and lead were in the blood of some heart attack victims, signifying that toxic heavy metals likely contribute to the high rates of heart disease as well. Standard education about a healthy lifestyle and awareness of symptoms are important to reduce heart disease rates, but addressing the issues unique to Bangladesh such as toxic metal contamination and poverty induced stress is crucial as well.

These five disease categories are only some of the common diseases in Bangladesh. There are hundreds of other diseases and health issues that afflict people in Bangladesh, but the severity of many diseases has decreased thanks to continually improving healthcare and education.

High rates of immunization and vaccinations help prevent diseases such as polio and measles, but there are still many ways for Bangladesh to continue fighting illness and improving their healthcare. Though 84% of children get vaccinated through age two, limited medical services in rural regions and lack of family funding sometimes causes households to drop out after the first round of vaccines. As a result, addressing these issues will help improve countrywide health.

Continued education about various health practices and symptoms will also be necessary to prevent and treat diseases. NGOs will likely continue to play a significant role in Bangladesh’s improving health, but addressing poverty and increasing fair access to healthcare will be indispensable as Bangladesh moves forward.