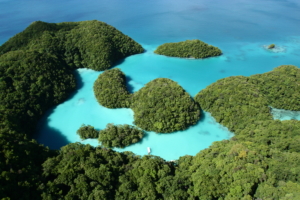 Palau is an independent island group in the Pacific located just southeast of the Philippines. In July 2020, Palau recorded a population of 21,685 people. The latest data from 2006 shows that 24.9% of people were living below the national poverty line. Despite this figure, the quality of living in Palau is actually among the highest in the Pacific. There are three factors that impact poverty in Palau; tourism, geographic location and non-communicable disease.

A number of factors make it difficult for Palau to maintain a healthy and growing economy. Palau’s economy relies mainly on the tourism industry, with trade-in fishing and agriculture as secondary industries. Because of its reliance on tourism and its remote location, Palau is vulnerable to external economic shocks or other global events. Since gaining independence in 1994, Palau has come a long way with achievements like universal access to healthcare, quality education and the formation of valuable regional and global partnerships. It has also moved towards a gradual reduction in poverty but still struggles with this issue.

In the 2019 United Nations Sustainable Development Goals (SDGs), Palau identified the eradication of poverty in all its forms as its primary goal. To achieve this goal, Palau currently focuses primarily on supporting its economy, strengthening its agriculture industries and improving health services.

Because Palau’s economy heavily relies on tourism, the small island nation is particularly susceptible to global factors that affect tourism rates. In 2019, Palau reported a GDP growth rate of -1.8%, showing a declining economy which was expected to continue declining in 2020 to 9.5% following a slump in tourism. The COVID-19 crisis is especially damaging to Palau’s economy as it has caused tourism to fall to an unprecedented low. Palau’s reliance on tourism poses a risk to its overall economic stability and vulnerability to poverty. High tourism rates are highly variable and dependent on global events.

In order to best take advantage of its tourism industry, Palau developed the Palau Responsible Tourism Policy Framework in 2015. This aims to pursue a more sustainable and lucrative tourism industry by moving from a high-volume industry to one focused more on low-volume tourism but with a high-value experience. These goals will be achieved through coordinated management between the public and private sector, community awareness and a focus on attracting high-value consumers with new marketing strategies. This shift will help make revenue from tourism in Palau less volatile. Therefore, it will contribute to a more stable economy and promote sustainable growth.

As a small group of islands in the Pacific, Palau’s geographic location and topography make it susceptible to factors that can exacerbate poverty. Pacific islands are often vulnerable to cyclones, violent storms, tidal surges, drought and other natural disasters. As a result, it can wreak havoc on infrastructure and natural resources. Additionally, Palau’s topography is mountainous, and only about 2.2% of its land is arable. Because of its minimal arable terrain, Palau is currently unable to satisfy food demand with domestic production. Consequently, Palau is highly dependent on foreign food imports. This accounts for roughly 86% of Palau’s food expenditures being used for imported foods. This dependence on imported foods can be dangerous because even short disruptions in food shipments can result in the depletion of food stocks.

To address this issue, Palau creates a Policy to Strengthen Resilience in Agriculture and Aquaculture. It sets a target to meet 50% of food requirements with local production by 2020. New practices in pursuit of this goal include switching to more resilient crops. As a result, it can withstand natural disasters and saltwater intrusion, increase the number of farms and better manage farmland. Between 2015 and 2017, land used for agriculture increased from 306 hectares to 503. The number of commercial farms rose from 16 to 19. In addition, more students enrolled in agriculture at Palau Community College.

As part of its third 2019 Sustainable Development Goal, Palau indicates that non-communicable diseases are a factor causing people to fall into poverty. The report reveals that the main non-communicable diseases in Palau include cardiovascular diseases, cancer, diabetes, lung diseases and mental health disorders. These diseases are at extremely high levels in Palau. It accounts for more than 80% of deaths and lowering life expectancy. In 2011, the government declared a state of emergency in regards to non-communicable diseases. Additionally, the government addresses the issue through the promotion of healthy choices in schools and workplaces. It focuses on beginning preventative education in early childhood. To combat the proliferation of disease overall, Palau is vowing to strengthen its health systems. The country will provide accessible and quality hospital and primary and preventative services.

While Palau generally experiences a higher standard of living than some of its neighbors, economic instability, geographic factors and non-communicable diseases contribute to poverty. However, measures are being taken to strengthen and improve each of these sectors. Through these efforts, Palau is optimistic that it can become more resilient and achieve its goal to eradicate poverty.