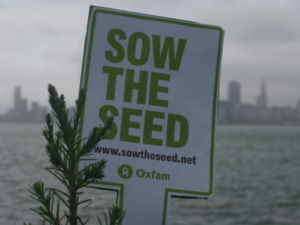 Founded in 1970, Oxfam America works with people in more than 90 countries to create effective and lasting solutions to end poverty and campaign for social change. Here are 8 things you should know about the organization.

1. Oxfam America works on a global level to reduce poverty, hunger and injustice.

Oxfam America operates on the belief that poverty is wrong. They work on long-term solutions that address the underlying causes of poverty, and campaign for social change. Current Oxfam America projects include GROW, a movement that aims to build a better and more sustainable food system, and Aid Reform, which works to increase the U.S. government’s commitment to poverty-reducing foreign aid.

Oxfam America is highly rated by several independent charity evaluators. The American Institute of Philanthropy and Charity Navigator have both given the organization high ratings.

3. They partner with local and national organizations.

Oxfam America aims to help local partners become self-sufficient by building alliances, networks and effective organizations. They create reciprocal relationships, learn about solutions to poverty from their partners, and providing them with funding and collaboration opportunities. Oxfam America works with their partners to provide communities with finance options, disaster and conflict relief, food security, and safe water sources, among many other things. Along with 17 other organizations, Oxfam America is united in the global effort to fight poverty; they work with 3,000 local partners in more than 90 countries and invest more than $1.1 billion annually to poverty-related causes.

4. They act on the belief that fighting poverty is about fighting injustice.

Oxfam America holds the strong belief that poverty usually arises from the violation of people’s basic rights. Acting on this belief, Oxfam America promotes the idea that knowledge is power. By educating individuals on their basic human rights, the organization helps create communities that keep their governments and government officials in check. Accountable governments change the systems that keep people trapped in poverty.

5. The projects they fund are community-driven.

By using solutions that are unique to the location and context of the problem, Oxfam America is developing the most sustainable and appropriate methods to combat global poverty.

Oxfam America believes that poverty leaves people and communities in vulnerable conditions. They believe that poverty forces people to live in dangerous areas or build unstable houses in areas prone to natural disasters. Oxfam reports that the impacts of climate change will result in unprecedented pressure on global food prices, which will be a huge burden on the world’s poorest people who already have to spend up to 75% of their income on food.

7. They believe that laws, policies, and institutions have an enormous impact on poverty.

Much like the Borgen Project, Oxfam America works with decision-makers to encourage them to respect the views of the poor communities and to implement foreign aid programs that will be most effective in reducing poverty. By opening dialogues with the people who are directly affected by poverty, Oxfam America is giving a voice to those who need one the most.

8. Everyone can join in with Oxfam’s effort to fight against poverty and injustice.

Oxfam America believes that everyone has a part to play in the fight against poverty; by encouraging individuals to work together, the organization aims to raise awareness and inspire action on the world’s most urgent issues.