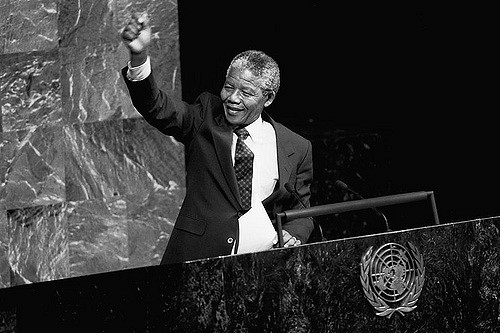 Throughout history, activists have played major roles in inspiring change and fighting injustice across the globe. From challenging dictatorships to opposing racism to promoting equality for women, nearly every social and political change has come about due in large part to advocacy and public engagement. With that in mind, here are 10 quotes to inspire activism within all of us.

“One child, one teacher, one book, and one pen, can change the world,” Yousafzai said while giving a speech to the U.N. Youth Assembly.

Yousafzai has spent her life advocating for Pakistani women and children and fighting for access to education worldwide. The young activist recently collaborated with British journalist Christina Lamb to publish a book titled “I am Malala: The Girl Who Stood Up for Education and Was Shot by the Taliban.”

“When the whole world is silent, even one voice becomes powerful,” the Nobel Peace Prize winner said during a speech at Harvard University in 2013.

“One of the great liabilities of history is that all too many people fail to remain awake through great periods of social change. Every society has its protectors of status quo and its fraternities of the indifferent who are notorious for sleeping through revolutions. Today, our very survival depends on our ability to stay awake, to adjust to new ideas, to remain vigilant and to face the challenge of change,” King said in a speech near the Washington Monument in 1968, on the dangers of neglecting important social issues.

As a Baptist minister and social activist, King was a prominent leader of the U.S. Civil Rights Movement. His speeches and legacy continue to inspire activists to pursue political and social change.

“How wonderful it is that nobody needs to wait a single moment before starting to improve the world,” Frank wrote as a child while hiding with her Jewish family from the Nazis during World War II.

Frank’s writings were later published as a book titled “Anne Frank’s Tales from the Secret Annex” and have inspired activists for decades.

“Try and understand what part you have to play in the world in which you live. There’s more to life than you know and it’s all happening out there. Discover what part you can play and then go for it,” McKellen said.

As an accomplished and well-known actor, McKellen has used his public stance to advocate for LGBT rights across the globe for many years. In 2014, McKellen published an open letter to President Vladimir Putin in an effort to address LGBT issues in Russia.

“What counts in life is not the mere fact that we lived. It is the difference we have made to the lives of others that will determine the significance of the life we lead,” Mandela said in 2002, at the 90th birthday celebration of Walter Sisulu in Johannesburg.

Mandela dedicated his life to global peacemaking. In 2009, his birthday was declared Mandela Day, an international day to promote peace, celebrate his legacy and inspire activism across the globe.

“There’s a gap somehow between empathy and activism. Rev. Dr. Martin Luther King Jr. spoke of soul force, something that emanates from a deep truth inside of us and empowers us to act. Once you identify your inner genius, you will be able to take action, whether it’s writing a check or digging a well,” Kidd said to Marie Claire.

Kidd is an accomplished author, best known for her novel-turned-film “The Secret Life of Bees” and has spent her career writing narratives that inspire women in particular.

“Developing compassion for Congress and politicians is a good way to begin practicing the new social activism if you want to make effective changes in the world. Perhaps the most startling new insight of all is that there is no other way to effectively change the world,” Zukav told the Huffington Post.

Zukav is a New York Times bestselling author, who is well known for advocating for compassion in politics and society.

“Optimism for me isn’t a passive expectation that things will get better; it’s a conviction that if we can make things better — that whatever suffering we see, no matter how bad it is, we can help people if we don’t lose hope and we don’t look away,” Gates said in the Bill & Melinda Gates Foundation 2014 commencement address.

Gates is a well-known philanthropist and businesswoman. She is the co-founder of the Bill & Melinda Gates Foundation.

“Sometimes it’s the people you can’t help who inspire you the most,” she said.

“Don’t let complexity stop you. Be activists. Take on the big inequities. It will be one of the great experiences of your lives,” Gates said in a Harvard University commencement speech.

While Gates is widely known as a co-founder of Microsoft, he has devoted much of his life to philanthropic work to promote global policy and advocacy and is also a co-founder of the Bill & Melinda Gates Foundation.

“Do it! What are you waiting on? Do it! Stand up for what you believe in. The world needs your voice. Whoever you are, you have something to say. Say it,” Washington told Women’s Health.

As a well-known actress, Washington has been a vocal proponent for women to stand up for causes they believe in.

“I’m really inspired by women who are unafraid to be of service around social issues,” she said.

Five New Cosponsors of the Global Food Security Act of 2016What is the Job of a Senator?
Scroll to top