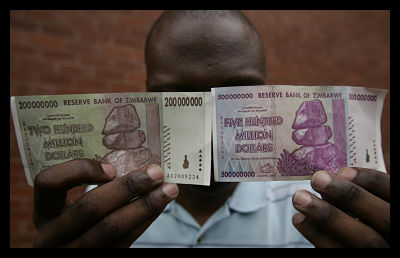 In 2008, inflation in Zimbabwe soared to nearly 80 percent, prompting the African country to opt out of the Zimbabwean currency and switch to the U.S. dollar. However, many Zimbabweans are finding themselves literally waiting for change—pocket change, that is.

There is little to no access to American coins, forcing shopkeepers and others sellers to give pens, sweets or chewing gum as change for American dollars. Zimbabwe now faces the opposite problem it had before: instead of money being worth too little, it is now worth too much.

To the average Zimbabwean, an American dollar is a lot of money. However, coins are more expensive to ship than dollars, and therefore it has proved a difficult task to get American coins to Zimbabwe. Last month, the national bank began issuing “bond coins,” denominated in American cents, to be used only in Zimbabwe.

Besides Zimbabwe, four other countries have adopted the use of the U.S. dollar, but also hang on to a national currency, even if it is not in circulation. Countries that use the dollar get around the “coin problem” by minting local coins. But that requires confidence in the local government, something that is in even shorter supply in Zimbabwe than coins. Zimbabweans say they want “no legal tender issued by their government.”

There have been many improvements provided by the currency change. Zimbabwe’s economy has been rocky; between 1990 and 2003, the poverty rate rose from 25 percent to 63 percent due to the political and economic crisis. By wiping out inflation, the U.S. dollar saved Zimbabwe from a potential economic collapse that would have plummeted the country even deeper into poverty. After inflation stopped and normal commerce resumed, importers experienced reduced transaction costs.

The economy may be growing, but it rests on a rocky foundation. The government has remained under the same leaders since the 1980s, and Zimbabweans receive very little from it. Even as education expands, employers receive improper training, funds and wages. Mining used to carry Zimbabwe, but now the government has adopted an indigenization policy, and deposits of gems and minerals are nearly exhausted. Commodity prices are falling and fewer investors are getting involved in Zimbabwe’s unstable economy.

If Zimbabwe sees no improvement in the economy, poverty will continue to rise throughout the country. Zimbabwean officials claim that the economic growth of the country fell in 2014 from six percent to three percent. However, as the country learns more about the U.S. monetary system, expands education and revises the government, Zimbabwe is on the track toward a brighter future, with enough change to go around.