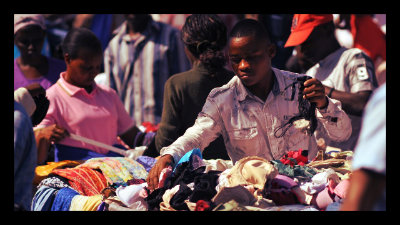 How is it possible that your old clothes could be hurting Africa and its economy and you may not even know about it? The answer is not so simple.

Often times when Western countries have used, unwanted clothes they cannot get rid of, they end up a landfill. More recently though, charities that collect used clothes in North American and European nations can sell them to wholesalers who package and re-sell them to other countries, particularly those in Africa. Instead of decaying in a landfill, these clothes are desirable and affordable for people in lower-income countries.

“What’s the problem with that?” you may be asking yourself.

In the short-term it could be a win-win situation. People can donate their old clothes to charities, charities can sell them to earn revenue, third-party wholesalers can re-sell them to other countries, people in Africa have access to affordable, well-made clothing, and everyone’s happy. In the long-term, though, the African clothing manufacturers may not be so happy. If African countries continue to rely on Westerners giving away their old clothes, they may not be able to support their own clothing businesses within their borders. In fact, several Africa clothing industries have already gone out of business because of the cheap clothing coming in from other countries, which cuts jobs, decreases revenue, and increases reliance on Western nations.

So what can be done about this problem?

Some African countries are banning imported second-hand clothing to try to rebuild their own clothing businesses. But even with the ban on Western clothing, there is still access to hand-me-downs from other areas of the world – particularly China and the Far East, where clothing is even cheaper. Sylvia Owori, a clothing designer in Uganda, realizes the problem but is forced to accept reality. “As much as I don’t like second-hand clothes to be in the market, I don’t have an alternative,” she says. “I cannot make enough clothes to support a population of 33 million.”