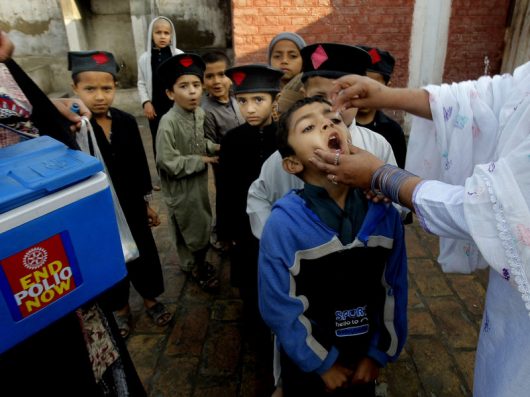 In a coordinated effort of unprecedented size in vaccine withdrawal, 155 countries switched polio vaccines. The switch to the newer form of the polio vaccine occurred between April 17 and May 1 and could help stop the trend of polio-based paralysis in hundreds of thousands of children.

Monitors from the World Health Organization are following up in various countries to confirm that stocks of the old vaccine have been properly disposed of. The switch was the second phase of the WHO’s Polio Eradication and Endgame Strategic Plan 2013–2018.

Eventually, the WHO’s plan anticipates a complete withdrawal from oral polio vaccines in 2019 or 2020.  In addition, it foresees a complete reliance on inactivated vaccines, which contain dead forms of the virus.

Health care providers use oral vaccines because they are cheap and easy to administer. These vaccines work by containing a weakened, but still live, form of poliovirus and exit in the stool shortly after vaccination. In areas with very inadequate sanitation, the viruses have an extremely small chance of spreading between children and redeveloping the ability to cause paralysis.

The switch is from a trivalent form of the polio vaccine that protected against three strains of the virus. The newer, bivalent form no longer contains the type 2 strain, which has been declared eradicated in its “wild” form with no new cases since 1999. Because the Type 2 vaccine viruses can reduce immunity to the other strains and increase the chance of redeveloping paralysis, removal of the type 2 component was the next step in the long-term polio eradication plan.

The global polio eradication has found success in all but two countries, Pakistan and Afghanistan, since it began in 1988. The U.S., which discontinued use of the oral vaccine since 1999, relies on the injectable polio vaccine and was not involved in the recent switch.

The slight possibility of a Type 2 poliovirus outbreak exists because of the switch. Therefore, a stockpile of monovalent oral polio vaccine containing only the type 2 virus will be kept. Synchronizing the switch across the globe was thus crucial in minimizing the risk of the Type 2 poliovirus reemergence.

Polio is at its lowest rates in history. Leaders of the eradication program foresee that if no additional cases occur in the next three years, polio could be declared fully eradicated by 2019. However, countries should continue vaccination for at least five years afterward. If success continues, polio will be only the second disease after smallpox to be eradicated by vaccines.

Global Soap Project: Changing the World with SudsFive Movies About Hunger You Should Watch
Scroll to top