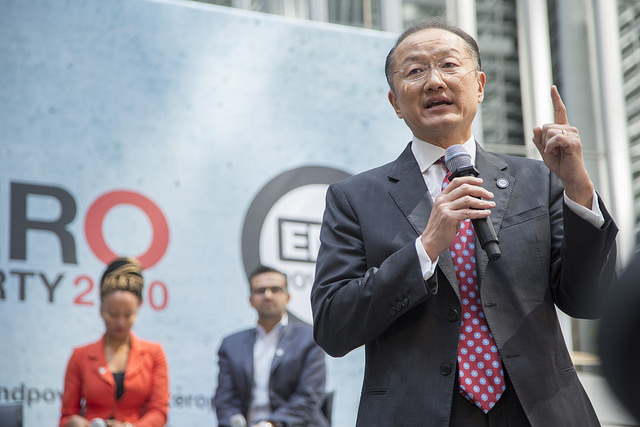 World Bank President Jim Yong Kim said at the start of his term in July 2012 that he wants to eradicate poverty by the year 2030. Jim Yong Kim is the 12th president of the World Bank Group, nominated by Barack Obama in 2012, and unanimously reappointed in September 2016 to an additional five-year term to head the global financial and technical assistance program. Kim established these twin goals to inspire the work he accomplished throughout his term: alleviating poverty by 2030 and increasing shared prosperity.

In a speech delivered at Stanford Graduate School of Business in 2015, Kim proposed that efforts be refocused on improving health in developing nations. If we want to end poverty and stimulate the global economy, redirecting efforts to improve healthcare systems is the best way to accomplish these goals. Kim wants to capitalize on the World Health Organization’s goal of reducing the number of stunted children in the world by 40 percent by 2025. Kim proposes to completely rid the world of cognitive impairments brought on by malnourishment and understimulation by 2030 as well.

The secretary is well on his way to achieving the goals he put in place at the start of his term. In a press conference held in October 2017, Kim revealed that over 800 million people have escaped the grip of poverty as a result of China’s poverty reduction efforts. The World Bank’s involvement with China will continue in the form of improving its healthcare system, promoting access to social services in rural regions and supporting China’s focus on increasing domestic consumption. Similarly, multicomponent efforts have reduced the world’s population who live on less than $1.90 a day from 1.86 billion to 767 million people. This means that nearly 1.1 billion people have been lifted out of extreme poverty since 1990.

In addition to these accomplishments, the World Bank also reached its target goal of disbursing $518 million to support countries affected by the Ebola outbreak in 2016. World Bank President Jim Yong Kim’s career has been dedicated to global health, education and ameliorating the conditions of the world’s poor. With these goals in motion, the year 2030 should be a beautiful one.