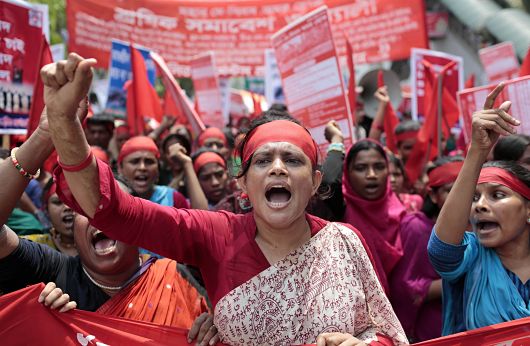 In Bangladesh, there has been a trending migration from the Ganges Delta region into the cities. Governmental research teams estimate that around 1.5 million of Dhaka’s 5 million inhabitants have moved north from the Bay of Bengal delta region. The absence of agricultural work has forced Bangladeshis to relocate into the cities in search of factory and industry jobs.

Both domestic and foreign industries have taken notice of this in state migration and have made efforts to diversify and broaden Bangladesh’s economy. The intensified demand for factory jobs has caused an increase in competition and a desperation for work. Influxes of other ventures have made a significant impact on the Bangladesh economy. One global market that has benefited from these conditions is the textile and garment industry. Such businesses now command 80 percent of exports, 45 percent of the industrial workforce and 15 percent of the GDP in the country.

A recent phenomenon in the global garment industry is “fast fashion,” which utilizes cheap materials and labor to maximize production and minimize costs. In order to achieve these results, the industry is outsourced to foreign countries. There are currently over 4 million Bangladeshis working in textile and garment factories. Workers typically make less than $40 U.S. per month and are often subjected to overcrowded working conditions and long hours. Routinely considered modern slavery, destitute Bangladeshis are often underrepresented and easily taken advantage of in textile factories.

Since 2005, there have been over 2,000 deaths related to garment factory accidents. In April 2013, the Rana Plaza factory collapsed, killing over 1,100 workers. The factory was built on swampy marshland, completely unfit for any structure of its size. Investigations revealed that the foundation of the eight-story building was cracking and in need of serious repairs. Additionally, it appears that the top three stories were added illegally. Unfortunately, most garment factories in Bangladesh are in similar condition to the Rana Plaza factory.

While the Rana disaster was certainly not the first garment factory accident, its magnitude has garnered worldwide attention. Activists from 75 different countries have joined together to create “Fashion Revolution,” a group focused on providing resources for retailers, brands and consumers to educate themselves about the state of textile workers. The organization has worked to make the anniversary of the Rana Plaza collapse, April 24, “Fashion Revolution Day.” On this day each year, world citizens are asked to wear their clothes inside out in an effort to recognize the origin of their garments.

Global retailers and brands, such as H&M, Walmart and Gap have called on Bangladesh to overhaul the industry. They have advocated for the institution of reforms and oversight procedures on factories and the workers’ rights. In response, the Bangladeshi government has received global recognition for their realignment efforts. The International Labor Organization (ILO) in Bangladesh has taken the initiative to set up a global fundraising campaign for the victims and families affected by the tragedy. In total, $21.5 million has been raised as compensation.

Additionally, the ILO has implemented governmental measures to streamline the initiation and registration of workers unions. In 2012 there were just over 100 worker unions, and there are currently under 500. The government has also instituted mandatory inspections of the 3,500 factories exporting clothing. So far, 35 factories have been shut down for violations ranging from building safety to working conditions.

Recently, the Bangladeshi law enforcement also pressed combination charges of murder and construction violations against Sohel Rana, the owner of the Plaza, and 41 others. This is a significant development, as garment factory owners in the past have been untouchable because of their influence economically. These efforts and changes made domestically and internationally could hopefully signal a new era of accountability and protection for the textile workers of Bangladesh.