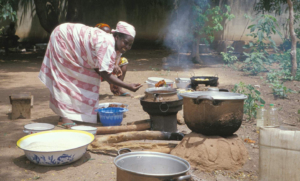 Each day, 3 billion people cook meals over a fire, producing air pollution that results in 4.3 million deaths a year. To reduce this number, wood stoves can be used as an alternative to open fires. Providing a safe wood-burning cook stove would be a three-fold win for the millions of people in the developing world because:

Potential Energy is a nonprofit dedicated to making and adapting life-changing technologies to be used in the developing world. With this goal in mind, they created the Berkeley-Darfur Stoves to improve the lives of women and their families.

Potential Energy first designed the stove in the Lawrence Berkeley National Laboratory. The stoves are low-cost and high-efficiency. They reduce the amount of fuel used by 50 percent, saving the women and families time and money. In addition, they asked for input from Darfuri women to maximize usage.

Some of the modifications that arose from the Darfuri women’s suggestions were a tapered wind color to maintain efficiency in the windy Darfur environment. The stove itself has feet for stability and stakes in case additional stability is needed. Most importantly, there is a small firebox, which prevents the user from putting in more wood than is absolutely necessary.

Once the designing and production processes were set in place, Potential Energy opened up local workshops where they now produce about 100 stoves per day, creating jobs and local business. There are two facets to the business, sales and distribution, and both of these bring a steady income to the employees, all of who are from the area.

Potential Energy teams up with local community and women’s organizations to distribute the stoves to those most in need. As of 2014, 42,000 stoves have been distributed to areas in Sudan and Ethiopia.