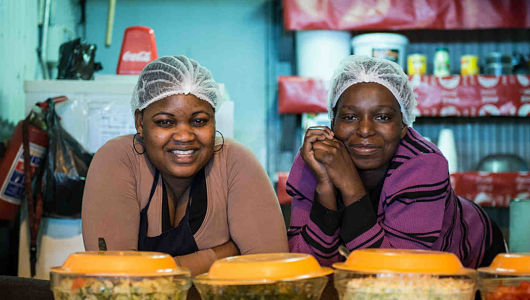 Three Entrepreneurs from Ghana, Cameroon and Rwanda are applicants to The Anzisha Prize. The prize aims to support young, African entrepreneurs who have created innovative change in their communities by addressing social issues or starting successful small businesses.

Twelve of the finalists win a free, week-long trip to South Africa to participate in entrepreneurship workshops and conferences at the African Leadership Academy campus near Johannesburg. The grand prize winners are then selected from the top twelve and receive $75,000 dollar prizes that will give their small businesses a jump-start as well as publicity.

In 2015, the organization selected winners from a pool of around 500 applicants. The amount of applications this year is a record—but only 27 percent of them were women applicants.

Despite the low number of women applicants, there are many women entrepreneurs in Africa. However, they are often forced into innovative solutions out of need, rather than a desire to do so. How We Made it In Africa described in an illustrative example, “This means that they might be self-employed by selling fruit on the side of the road, but the opportunity for them to grow beyond the informal stage may never present itself.”

African women usually lack access to education on financial and development skills; this is due to the fact that males are typically sent to school more often than females.

Still, the following Anzisha Prize women have overcome the odds and made positive, impactful changes in their communities through their entrepreneurial innovation.

Mabel Suglo is a 21 year old woman from Ghana, a co-founder of the Eco-Shoes Project. The initiative helps disabled artisans assemble desirable, marketable shoes out of used tires and recycled clothing.

The Project began in 2013; today five people work for Suglo.

“There are millions of discarded car tyre stockpiles and waste materials in Ghana which pose an environmental and health hazard. Eco-Shoes rescues some of the millions of tyres and other material waste creating an environmental nuisance, to make fashionable and comfortable shoes.” said Suglo, according to How We Made it in Africa.

If Suglo wins the Anzisha Prize, she plans to invest in more sophisticated machinery to increase shoe output. She also wants to create an e-commerce site and give her workers improved training in technology.

In 2013, when Vanessa Zommi was only seventeen, she founded Emerald Moringa Tea in Molyko, Cameroon. The company treats the moringa plant, transforming the raw substance into a healthy tea that treats diabetes.

“The World Health Organisation’s research estimates 190 million people suffer from diabetes worldwide. This research further estimates that by the year 2025, there will be about 330 million patients in the world. Studies show that drinking moringa tea after a meal can ease digestion, and after two hours of intake, sugar levels in the body drop.” said Zommi, according to How We Made it in Africa.

Zommi plans to expand her company in the future; she currently employs six people and sales are limited to Molyko, Cameroon. She hopes the prize money will assist her in this expansion.

Chantal Butare, a twenty-one-year-old graduate of the University of Rwanda founded a dairy cooperative that aids farmers who produce milk in accessing markets.

Butare started the Kinazi Dairy Cooperative in 2012; she noticed farmers, especially women farmers, often struggled to sell all of the milk they produced.

The Cooperative, to date, has helped over 3,200 farmers. It employs twelve milk collectors who supply Rwanda and Burundi.

“My vision is to help eradicate poverty and hunger among vulnerable people in my community,” said Butare, according to How We Made it in Africa.

Sources: Anzisha Prize, How We Made It in Africa
Photo: Clinton Foundation