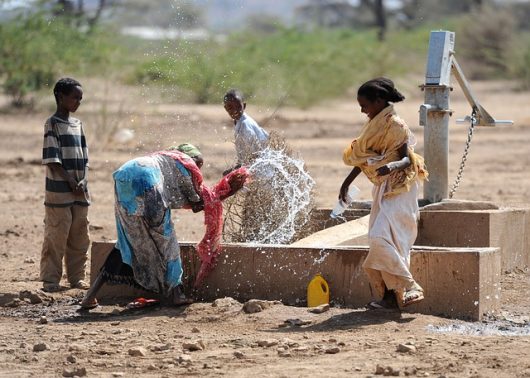 Ethiopia’s poverty rate of 44 percent, and many Ethiopians live in hazardous conditions. Some of the country’s homes are made from cardboard. Others are made from rope, sticks, mud and other materials that cause poor hygiene for residents. Many homes even lack windows and sometimes trap hazardous fumes inside. The question is, why is Ethiopia poor?

Droughts and other disasters cause Ethiopia’s farms to lack necessary amounts of rainwater for irrigation. Famines occur in effect and leave crops to suffer greatly. Ethiopia’s food and fertilizer prices increase as well, leaving many residents without the financial means to afford these items. This is especially problematic when considering that 80 percent of Ethiopians rely on agriculture to stabilize their economy.

A lack of infrastructure and basic services, such as safe drinking water, education and healthcare, contribute to Ethiopia’s poverty as well. Malaria, HIV and other diseases often kill Ethiopia’s young residents who provide for their families. If more Ethiopians had access to healthcare and other vital services, more Ethiopian families might be able to rise above poverty.

Why is Ethiopia poor? Human rights abuses, even though some have been carried out with the intent to strengthen Ethiopia’s economy, have done great harm to the country’s poor. “When a society is not free, development is not as sustainable,” according to Obang Metho, executive director of the Solidarity Movement for a New Ethiopia.

There is hope for positive changes to Ethiopia’s economy. For more than a decade, Ethiopia has witnessed an economic growth rate of 10 percent, bringing the country close to meeting the U.N.’s development goals. Ethiopia’s government plans for the country to have a middle-income rate by 2025.

Ethiopia’s poverty rate in 2000 was 44 percent but dropped to 30 percent by 2011. Agricultural growth was one of the main reasons for this change. It could help Ethiopians in the present if such a change were to occur again. Education, household health and living standards have also been making steady improvements since 2000.

Why is Ethiopia poor? Ethiopia should maintain a focus on agricultural development in order to strengthen its economy. Promoting the growth of farms and helping households overcome migration constraints could help Ethiopians achieve financial security as well. While safety net programs have also proven to be effective, those programs must still adapt to Ethiopia’s changing poverty conditions.