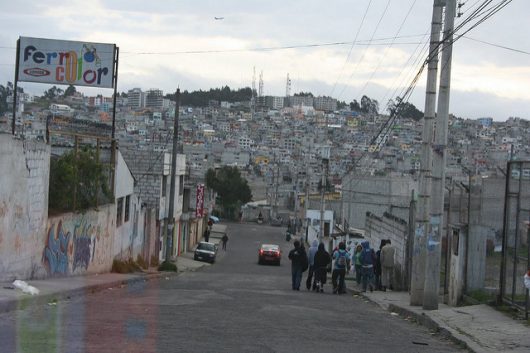 Ecuador’s poverty rate was 36.7 percent in 2007 and dropped to 22.9 percent in 2016. These results show that 1.4 million Ecuadorians escaped poverty within nine years. However, many Ecuadorians still live in impoverished conditions. The question is: why is Ecuador poor?

Ecuador has also implemented regulations that are making the country’s labor market more rigid. The regulations eliminated hiring contract alternatives and could even cause economic slowdown. Ecuador’s economic model being based on public expenditure could contribute to a weakened economy, as well.

Natural disasters also contribute to Ecuador’s poverty. In April 2016, the country had an earthquake that killed more than 670 residents, injured 5,000 and left 80,000 homeless. The earthquake also exposed prolonged problems related to Ecuador’s poverty problem that cannot be easily solved. Rural areas are especially at risk, with poor water systems and water-borne diseases.

Ecuador’s poverty is carried from one generation to the next, resulting in 70 percent of the country’s children living impoverished lifestyles. Children International, a nonprofit organization, is teaching children valuable skills that can help them break the poverty cycle. The organization’s Social and Financial Education program, for example, teaches Ecuadorian kids how to be responsible citizens and save money.

Why is Ecuador poor? Because in addition to rising unemployment rates, many Ecuadorians overlook the economic benefits of conserving native forests. Fortunately, the country’s government has established a Socio Bosque (Forest Partners) program that provides Ecuadorian landowners and communities with economic incentives based on the number of forests they help to protect.

In Feb. 2017, Ecuadorians voted for a runoff election between two presidential candidates (Lenín Moreno and Guillermo Lasso) who had different approaches to reviving Ecuador’s economy. Moreno promised to build houses for Ecuador’s 191,000 poorest people, while Lasso promised to trim government spending and cut taxes. Moreno won the election and became Ecuador’s new president in May.

Why is Ecuador poor? Because natural disasters, economic struggles and poverty cycles can affect Ecuadorians and their families for generations. The problem could be remedied under Moreno’s legislation, especially with the president’s plan to provide housing for Ecuador’s impoverished residents. Children International’s efforts to educate Ecuador’s children could help the country’s future generations escape poverty as well.

Why Bangladesh Is Poor Genetic Diseases in Oman
Scroll to top