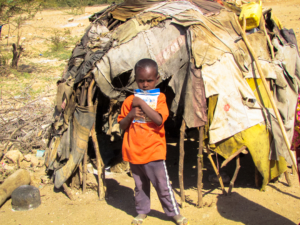 An initiative called the #GlobalPOV Project is merging social theory, art, and digital media to spark discussion and critical thinking on the problem of poverty and how to deal with it.

“We are the millennials and we are on a mission to make poverty history.”

Those are the words of Ananya Roy, a professor at UC Berkeley and well-regarded as an expert on global poverty, international development, and social change. In a series of videos, Professor Roy lectures on a certain theme dealing with global poverty while Abby VanMuijen, story artist for the #GlobalPOV Project, visualizes and draws on the paper what she sees in her head in a similar fashion to the videos produced in the RSA Animated Series.

The theme of the first video released was “Who Sees Poverty?” Professor Roy discusses how poverty emerged as a priority on a global scale. She calls it the democratization of development. As organizations like USAID, the World Bank, and the United Nations make ending global poverty the main goal through initiatives such the Millennium Development Goals, so we become the generation of global citizens that will continue working to end it, the ‘generation of millennials,’ through constant mobilization and inspiration.

“The ‘we’ who sees poverty is also the ‘we’ who acts on poverty,” says Professor Roy.

The second video released by the #GlobalPOV Project discusses the effects of consumerism and consumption on poverty. With a brief introduction from story artist VanMuijen, the video discusses the need to change how the products we buy are produced, traded and consumed to reduce the impact on the global poor.

“We can solve it, but not by sheer luck or chance,” says VanMuijen in regards to the world. “We must be taught the way.”

Implemented by the Blum Center for Developing Economies at UC Berkeley, the #GlobalPOV Project imagines new ways of looking at and combating global poverty and inequality. Established in March 2006, the Blum Center for Developing Economies works to improve the lives of those living in extreme poverty through investing in technologies and systems and inspiring others to do their part.

Who cares?: A Documentary About Social EntrepreneurshipUSAID Attacks Poverty At Its Root: The Educational System
Scroll to top