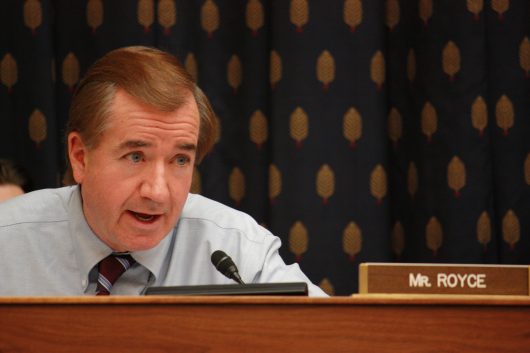 While the developed world sends emails to colleagues, updates friends on Facebook and conducts research using online databases, the 4.2 billion who lack access to the internet linger behind on economic, health and education development. The 60% of the population currently offline is predominantly low-income, rural, female, elderly and illiterate, according to the House Foreign Affairs Committee. Seventy-five percent of the 4.2 billion are condensed into only 20 countries.

During a $100 million road construction project years ago, Liberian officials decided not to lay cables that would have added $1 million to the project’s cost. The lack of connectivity in Liberia and other developing countries has cost lives and economic growth. The build-once policy would help avoid the need to later add cables for internet connectivity for tens of millions of dollars.

However, history has shown a lack of internet connectivity has repercussions reaching far beyond development as the world suffers the impacts of crises longer and more deeply. In 2014, the outbreak of the Ebola virus infected more than 28,000 people in West Africa, killing more than 8,000. This was due in large part to the lack of reliable internet access that hindered coordination between community health centers.

Those treating Ebola patients did not send patient information to other health facilities at the click of a button, but instead physically transported the information. This was not only less efficient, but also exposed those outside of the quarantined red zones to the virus. Increased internet connectivity during the Ebola outbreak could have cut exposures, improved the tracking of the viruses’ spread and opened the possibility of international analysis anywhere with scanned and uploaded patient documents.

The world faces a similar struggle in containing the Zika virus. The current strategy involves notifying travelers where the virus is, but officials in many developing countries have no way of tracking the effect of the virus in their own communities. Containing the virus and notifying vulnerable populations could be as Recode writes, “as easy as the click of a mouse or a swipe of a mobile application.”

In addition to improving crisis response, the Digital GAP Act’s purpose is to aid developing countries in expanding economies, creating jobs, improving health and education, reducing poverty and gender inequality and promote good governance of a populace. The U.S. is to “promote first-time internet access to mobile or broadband internet for at least 1.5 billion people in developing countries by 2020 in both urban and rural areas,” the House Foreign Affairs Committee wrote in an official press release.

The Digital GAP Act also stresses the importance of U.S. cybersecurity for the U.S. in its provisions. If passed, the Under Secretary for Economic Growth, Energy, and the Environment’s title would change to include “Cyberspace.” The Department of State would be required to designate an Assistant Secretary for Technology, International Communications and Cyberspace to lead diplomatic cyberspace efforts, and the president would include information on internet access, cybersecurity policy and internet freedom in the next White House Cyberspace Strategy session.

The U.S. Agency for International Development (USAID) would integrate efforts under the Digital GAP Act to increase internet access and the protection of private information. The Peace Corps Act would include an amendment that would allow the Peace Corps to develop volunteer positions for the purpose of increased internet connectivity. The president would share with Congress plans to promote U.S. partnerships to provide internet infrastructure for increased access in developing countries and direct the House in advocating for these efforts abroad.

The House of Representatives passed the Digital GAP Act and the Senate is expected to vote soon.