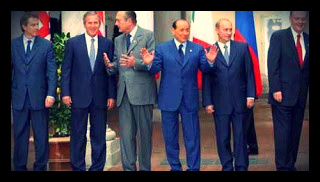 The Bilderberg Group is an annual conference designed to foster dialogue between Europe and North America. The group was started in 1954 when the first conference was held at the Bilderberg Hotel in Holland. The conference brings together 120-150 political leaders and experts from a variety of fields each year to discuss megatrends and major issues facing the world.

The Bilderberg conference provides an opportunity for informal, off-the-record conversation that is seldom possible in other venues. No official positions are required in the meetings. The conference provides attendees an agenda free, vote free setting where ideas are encouraged and participants have the opportunity to express their own opinions. No notes are taken, and no policy statements are issued before or after the conference.

Bilderberg grew out of the Cold War as a mechanism for European and North American communication, and today it remains a venue to discuss relevant and common problems facing the world. The group discusses matters surrounding trade, jobs, monetary policy, and international security. Dialogue between Europe and the United States is as important today as it was in the 1950’s.

The Bilderberg Group has received significant criticism over the years, however. Members of the media have labeled the conference as a “powerful global cabal” as each event is protected with heavy security and press is not allowed inside. Some conspiracy theorists have claimed the group runs the world. One prominent theory claims the group was responsible for the creation of the Euro, and that the group meets to select the winners and losers in the U.S presidential Elections, or at least the vice presidential pick.

Rumors like these persist in part because Bilderberg attendees are encouraged not to discuss the proceedings. However, to date there is no concrete evidence to suggest that the conference serves as anything more than an informal discussion of important problems and issues facing the world today.