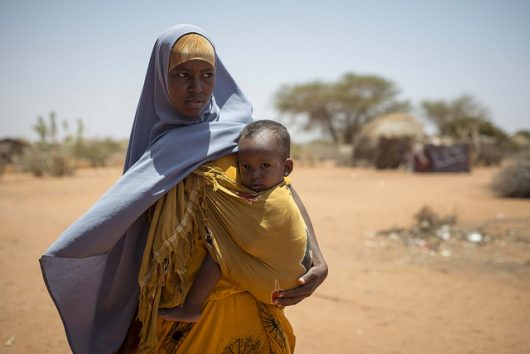 Clean water is essential to the survival of all living things. Weather conditions in the Horn of Africa, the lack of the yearly rainy season in 2016 and an increase in sea surface temperatures have created an extreme emergency. Drought conditions have affected water quality in Somalia and have created both a food and health crisis.

According to the World Health Organization (WHO), extreme drought affects more than 6.2 million people. Water quality in Somalia has deteriorated, placing 5.5 million people in danger of contracting waterborne illnesses — with half being women and children under the age of five. Drought conditions have also led to a food crisis affecting at least three million people and prompting President Abdullahi Mohamed to declare a national disaster. If conditions do not improve, the U.N. expects these numbers to double this year.

As the water quality in Somalia worsens so does the spread of diseases, such as acute watery diarrhea and cholera. More than 17,000 cases have been reported at the local Cholera Treatment Centre, and the number is expected to increase. The situation has been made worse by the food crisis, as people become undernourished and weak.

A lack of knowledge also contributes to the crisis. Ruun Ali, the mother of four-year-old Asma, said, “We don’t know what causes it, but many people are getting sick.” She brought Asma to the Cholera Treatment Centre when she became sick with vomiting and diarrhea.

UNICEF is providing support for treatment centers and hopes to save lives by providing medical supplies and educating people on health and hygiene.

UNICEF is working to improve the situation in Somalia. In addition to providing 400,000 people with vouchers good for a daily water supply, it is also digging wells and providing water, sanitation and hygiene kits, along with drums of chlorine to improve the water quality in Somalia.