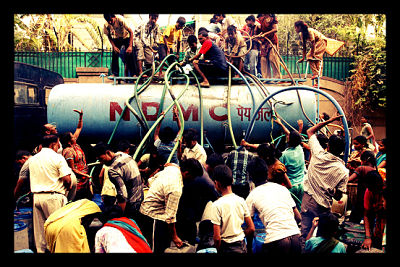 In the north Indian city of New Delhi, severe water shortages affect the entire city, a problem that will only be exacerbated as demand rises in the summer months. As the heat rises, demand for water can outstrip availability by 25% — and this number only refers to those areas of the city connected to the city infrastructure. Up to a quarter of the inhabitants of New Delhi have no access to piped water. In these areas people are forced to seek water from overused wells or polluted rivers, or the occasional tanker of water that is delivered.

As ever, the shortages are felt more strongly in lower economic circles. But even middle-class citizens are left scrounging for water to supplement what the city provides.

Many factors contribute to these continuing shortages. New Delhi’s population has swollen by nearly 50% over the past 20 years, and the city has been unable to keep up with infrastructural development. Across the city’s network, 25-40% of piped water is lost due to leaks, before arriving at its destination. Additionally, the majority of waste produced goes untreated, and is released into local bodies of water, polluting them and making them unusable as resources. For example, the Yamuna river, whose source lies in the Himalayas, enters the city still relatively clean, at which point some 200 million gallons are extracted from the river every day by the public water agency. However, as the river runs through the city, nearly a billion gallons of public sewage is dumped into it daily.

This problem of waste causes severe health concerns, especially in slums with no connection to the city’s sewage systems. In these areas sewage is left exposed,  contaminating water sources used for bathing and washing.

The irony of these water shortages is that New Delhi has access to enough water to feasibly provide for the demand. But due to these issues of infrastructure and treatment, the system is failing. And those most strongly affected are those underprivileged to begin with.

With water scarcity becoming increasingly a source of potential conflict, providing the infrastructure to alleviate the burden must be a primary concern of governments globally. Demand will only continue to increase exponentially, and while cities like New Delhi will be the first to feel the strain, they will not be the last.