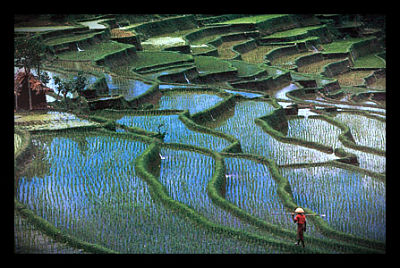 Climate change is having a profound effect on coastal rice farming. The resulting increase in pests, diseases, water scarcity, and salinity has been devastating to farmers.

Research conducted over the past decade demonstrates a strong relationship between climate change and the prevalence of disease and pests in rice paddies. Crop stressors like irregular rainfall often increase the virulence of rice blights such as brown spot and blast. Extreme weather, like flooding or drought, forces farmers into asynchronous, or unseasonal, cropping. Such practices, along with the weather events themselves, often lead to pest population explosions.

Water scarcity is another factor affecting rice production. As rice requires a certain amount of water to grow, even less-severe droughts can take a toll on production yields. Climate change continues to cause more frequent and more severe droughts, and rice farmers are starting to feel the pressure of drying rice paddies.

As higher temperatures and lower rainfall cause a decrease in ground water, sea levels continue to rise and intrude into fresh water areas. These factors cause a noted increase in salinity. Rice, particularly higher-yielding hybrids, is only moderately tolerant of salt. Thus, increases in the salinity usually see a decrease in yields for the affected paddies.

Drastic decreases in production are causing some farmers to abandon their fields. Several governments and NGOs, like Practical Action, a UK-based development organization, are launching initiatives to help these rice farmers cope with the growing challenges of climate change.

Practical Action partnered with farmers in southern Sri Lanka, a country that has seen significant effects of climate change over the past 20 years. The organization participated in farmer-led trials of traditional varieties of rice to assess each type’s resistance to temperature, pests, and salinity. The varieties were held against standards of crop duration, plant height, grain quality, and overall yield.

Sri Lanka has over 2,000 traditional varieties of rice. Most of these varieties had been abandoned for modern rice types and hybrids, but new climate challenges are turning many farmers back to indigenous varieties. The traditional rice is nutritional, some even having medicinal properties, and according to tests are more resilient in the face of climate change.

In fact, of the ten varieties tested by farmers in the Practical Action program, four scored high enough to now be officially promoted through farmer organizations as hardy and saline tolerant. The traditional rice cannot, generally, produce the high yields of hybrids, but its resilience and popularity in the consumer market still enable a farmer to generate profit.

It seems that for an agricultural community faced with emerging climate challenges, revisiting traditional methods could be the best solution.