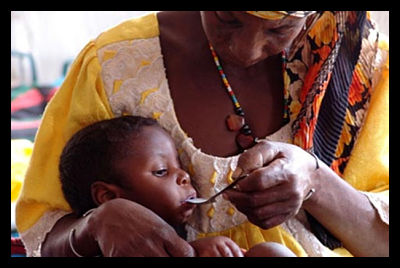 Last year, clashes in the Central African Republic, or CAR, between Christian and Islamic militants claimed the lives 2,116 civilians. The CAR is fast becoming home to a ghastly humanitarian crisis, in which violence is exacerbating malnutrition.

In the capital city of Bangui, the number of children facing life-threatening malnutrition has tripled since violence began escalating in December of 2013. Their situation is being complicated by the brutal course that the conflict has taken.

Action Against Hunger collected over 1,000 case studies of parents of malnourished children in the CAR between July 2013 and March 2014, and found that 75 percent presented symptoms of PTSD.

PTSD can significantly impair a mother’s ability to nurse a child. Nurses in health centers around Bangui have reported that some traumatized mothers become convinced that they cannot produce milk. Others simply do not respond to their child’s needs—some have even attempted suicide and infanticide. PTSD in children can also play a role in malnourishment, as traumatized children may refuse to eat.

The conflict in the Central African Republic is not only causing malnutrition—it is also exporting it.

Over the past year, conflict in Nigeria and the Central African Republic has displaced some 1.2 million people. These migrants typically seek refuge in neighboring countries like Chad, Niger and Cameroon, further straining the resources of countries already dealing with rampant malnourishment.

On Feb. 12, the U.N. requested $2 billion in aid for people across Africa’s Sahel belt—a semi-arid strip of land south of the Sahara Desert that stretches from the Atlantic Ocean to the Red Sea.

“The violence and conflict has a devastating effect, it is casting a shadow across the region,” said Robert Piper, U.N. regional humanitarian coordinator for the Sahel.