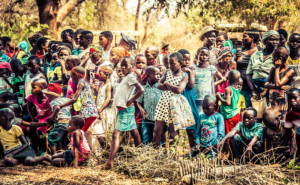 Since Zimbabwe’s independence in 1980, USAID has provided the country with over $3.2 billion in developmental assistance. USAID programs in Zimbabwe have focused on building the country’s health infrastructure, strengthening democratic processes and boosting economic growth. With alarming rates of HIV/AIDS, alongside hindered economic development over the past 30 years, USAID programs like Feed the Future’s FARM Initiative and investments in U.S. President’s Emergency Plan for AIDS Relief, are proving to be especially significant in developmental progress.

In 1991, HIV rates in Zimbabwe reached as high as 49.6% of citizens aged 15-49. This means that, just 32 years ago, about half of Zimbabwe’s adult population was HIV-positive.

While the statistic has dramatically improved to 2.4% in 2021, HIV remains a pressing health concern in the country.  According to WHO (World Health Organization), HIV infection rates were the same in 2021 as in 2020, with as many as “4,000 new infections every day in 2021.” Under PEPFAR (U.S. President’s Emergency Plan for AIDS Relief), USAID’s investment is changing lives for Zimbabweans. WHO also reported that, of these new infections, there seemed to be “key populations”: sex workers, men who have sex with men, people who inject drugs, people in prisons, and transgender people.” Based on these statistics, PEPFAR has begun releasing and administering Cabotegravir (CAB-LA), a pre-exposure prophylaxis (PrEP) for HIV prevention — with a focus on delivery to those “sidelined from access to health care because of laws and societal segregation.”

The Medicines Control Authority of Zimbabwe (MCAZ) approved the long-acting injectable in November of 2022, Zimbabwe being the first country in Africa to approve it.

Another way USAID is contributing to Zimbabwe’s development is through agricultural support. Through its Feed the Future program, USAID has offered assistance in rural employment, agricultural productivity and economic development to over 200,000 smallholder farmers.

Zimbabwe’s Fostering Agribusiness for Resilient Markers Activity (FARM), another USAID assistance program, has also had a major involvement in farming development. Established in 2020 and designed to run through June 30, 2025, FARM aims to support Zimbabweans through “climate-smart increased production, productivity, and market linkages,” essentially protecting and commercializing smallholder farmers to facilitate long-term growth. Two ways FARM aims to accomplish this goal, according to USAID, is through:

Thus, USAID’s agricultural assistance programs not only support farmers but equip smallholder farmers with the resources they need to sustain agricultural commerce.

USAID also focuses on democracy, human rights and governance in Zimbabwe. The agency’s work in this regard started in November 1999 in order to assist with a peaceful transition of power amid recent elections. Overall, USAID “strengthens accountability systems by assisting Parliament to increase their independence and effectiveness, improves inclusive electoral processes to better reflect citizen voices, expands access to information, and activates mechanisms for citizen advocacy and oversight.”