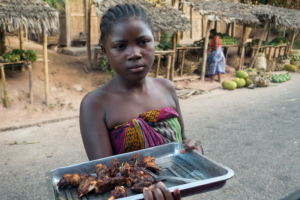 Madagascar is an island off the east coast of Africa, situated on the Indian Ocean. It is the second-largest island country in the world. Today, this island nation is facing a major food crisis and ranks 64 out of 79 on the 2012 Global Hunger Index. As of 2015, around 28% of the island’s population, nearly 4 million citizens, suffered from hunger. Here are some updates on hunger in Madagascar.

The Root of the Issue

A significant factor in Madagascar’s famine rates is its weather. The island is prone to periodic droughts, cyclones and unpredictable rainfall. From 1980 to 2010, the country experienced 35 cyclones and five long drought periods. Moreover, it experienced five large earthquakes and six epidemics during the same period. This type of environment makes it very difficult for farmers to steadily produce adequate crops for the country’s residents. Due to food insufficiency, 47% of the citizens suffer from malnutrition — one of the highest rates in the world.

The hunger rates within the last three years have not decreased. Conversely, the percentages continue to rise. In 2017, Madagascar’s famine rates increased by 1.4% to 44.4% from 2016. In 2018, two destructive cyclones caused flooding around the coastal areas of Madagascar. This affected roughly 200,000 citizens and displaced 70,000. During the same year, unpredictable rainfall dropped food production for around 80% of citizens. Fortunately, in 2019, livestock prices began decreasing due to the higher availability of food. Similarly, the price of rice decreased slightly since 2018 — suggesting modest improvements in the country’s food supply.

While the government has struggled to control Madagascar’s famine rates, other organizations have stepped in to aid the country with its food crisis. These organizations provide necessary resources to people across the island and representing positive updates on hunger in Madagascar.

The Food and Agriculture Organization (FAO), a U.N.-sanctioned organization, is providing agro-pastoral support to rural families in western Madagascar. The aim is to increase productivity in farming systems and improving farmers’ incomes. The FAO also is collecting and analyzing data on food security and agro-weather conditions to help farmers prepare for potential natural disasters. Importantly, these disasters would include climate-related crises. Also, the FAO supports government efforts to incorporate nutrition awareness programs into education systems.

As a temporary solution, the United Nations Children’s Fund (UNICEF) has paid trucks to deliver resources, such as clean water, to villages prone to contaminated drinking water. UNICEF also carries out routine health checks for children. In 2015, the organization began reporting high percentages of children suffering from malnutrition.

The World Food Programme (WFP) also came up with a short-term solution to address Madagascar’s hunger crisis. In 2016, within famine-affected areas, the WFP gave $20 each month to families to buy resources they could find. Also, it distributed nutritional supplements to children.

Overall, the famine statistics in Madagascar do not seem to be dropping. This is primarily due to the country’s geographic location. The island is more prone to natural disasters and the government does not have any long-term solution that can certainly decrease the country’s current high famine rates. Yet, with the continued support from international organizations, there may be a bright light at the end of the tunnel for Madagascar.