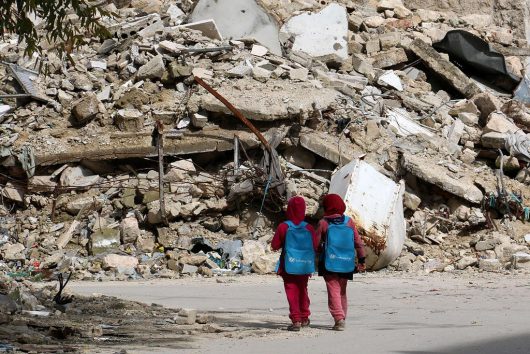 The Syrian civil war is now in its fifth year, but Stephen O’Brien, the U.N. Under-Secretary-General for Humanitarian Affairs, believes that the current fighting in Aleppo, Syria represents “the apex of horror at its most horrific extent of the suffering of people.” No group is more vulnerable to this horror than the children of Aleppo, who do not have access to fresh food, clean water, shelter, or medical care. Needless to say, education in Aleppo is also not the highest priority.

The fighting in Aleppo has not slowed, even after the recent photo of Omran Daqneesh, a five-year-old boy who was pulled from the rubble of his former home, went viral. Following the image’s release, Russia, the main ally of al-Assad’s regime, swore that it would enact a 48-hour ceasefire, but the combat has continued.

Control in Aleppo is split between rebels in the east and the Syrian government in the west. The 275,000 civilians in eastern Aleppo have not been able to receive any aid, while scarce amounts of goods have reached the 1.5 million in western Aleppo. According to an article published by TIME, there is “an estimated 75,000 children fighting to survive in eastern Aleppo”.

Education in Aleppo has suffered because of the danger that children are put in when they try to attend school. Save the Children reported that in the month of August 16 schools that they support have been hit or affected by bombings.

While UNICEF is fighting on many fronts in Aleppo, their most prominent initiative is providing children from the war-torn city with a proper education. In a recent article, UNICEF shared that it has built 130 prefabricated classrooms throughout Aleppo.

Unfortunately, one of UNICEF’s crowning achievements in their education campaign has recently become another victim to the fighting in Aleppo. UNICEF’s intermediary school in the 1070 neighborhood was severely damaged by bombings that began on July 31. The all girls’ school had 32 prefabricated classrooms with 2,500 students enrolled.

The 1,070 school offered hope to many children in the western Aleppo neighborhood, which is made up of thousands of displaced families. Though this tragedy is horrific, it does not signal the end of UNICEF’s campaign. The organization plans to rebuild these classrooms and is collaborating with Syrian officials on self-learning programs that will restore education in Aleppo.