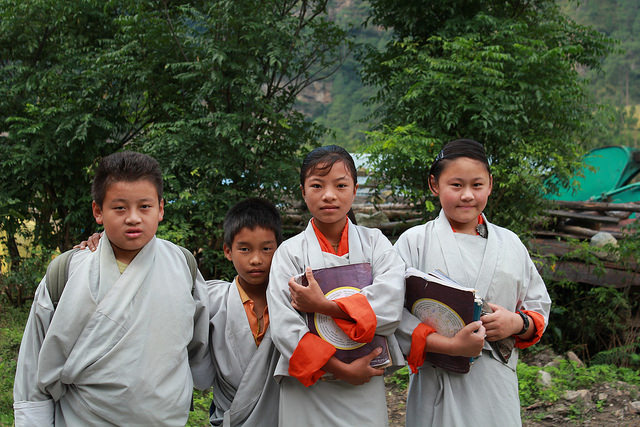 The encouraging transition towards gender equality within education in Bhutan has participated in the drastic decrease in their poverty rate from 23 percent in 2007 to 12 percent in 2012. An entire 11 percent has risen above the poverty line, in part because of girls’ greater access to education.

Traditionally, it was much more prevalent for Bhutanese girls to participate in domestic labor, such as babysitting and cleaning, while boys attended school. However, from 1992 to 2012 the enrollment rate has more than doubled from 50 percent to 110 percent because of the increase in female attendance. To compare data from 2012, 110 percent of males were enrolled in primary school, while 112 percent of females were enrolled. Not only has education in Bhutan bridged the gender gap, but there’s now a dominance of girls in school. It is important to acknowledge that the percentage rests over 100 percent because of a lack of children completing primary school when they are expected to, creating an overabundance of students.

The 2012 results for secondary school, in regards to gender, are similar to that of primary school, with 50 percent males and 57 percent females enrolled. In this regard, the issue no longer lies between gender differences, but rather with a lack of all children attending secondary schooling, which is defined as grades 7 to 12.

Child labor exists as one of the main deterrents to girls’ education in Bhutan. Although the country declared the legal working age as 18-years-old and provides free primary education, one out of five children are required to work to aid their families. Furthermore, 2012’s child labor rates were higher from females than for males, with 3.1 percent of girls and 2.6 percent of boys participating in any form of labor.

Perhaps the overall low enrollment for secondary school is due to the need for children to work and aid their families, paired with additional school fees and the cost of uniforms and materials. It is also not mandatory for Bhutanese children to attend schooling, allowing families to deny their children the experience if they are needed elsewhere.

A UNICEF representative spoke with a Bhutanese girl named Tsherin, who shared her dream to become a civil engineer and build homes. She tells of her excitement to get to attend school and she plans to advocate schooling to her own children someday. Tsherin has UNICEF to thank for this opportunity because of their successful efforts in closing this gendered gap.

UNICEF advocated ending the discrimination and gendered stereotypes, while also aiding those who could not afford additional school fees. They also addressed the lack of schools in rural areas, which hinders student’s access because of distance, by implementing new schools into these remote areas. Additionally, UNICEF was not alone in this fight. UNGEI (United Nations Girls’ Education Initiative) also sought the construction of new primary schools to meet the higher demand of students. But UNGEI also concerned themselves with advancing the training in which the teachers received, improving the student’s overall education.

With the help of these two organizations, education in Bhutan has undergone a tremendous feat by bridging the gendered gap and allowing all children an equal chance at becoming educated.