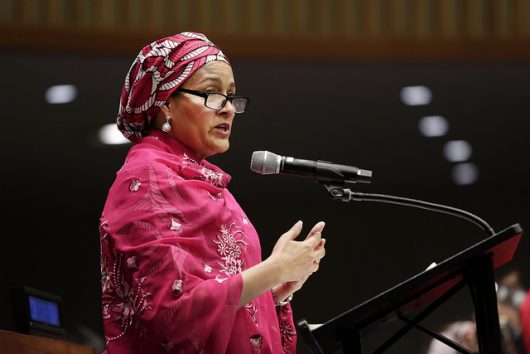 In her first official statement as U.N. Deputy Secretary-General, Amina Mohammed called for a new approach to achieving the Sustainable Development Goals (SDGs). She gave her speech to the U.N. Economic and Social Council (ECOSOC) operational activities segment, which met between February 28 and March 2, 2017.

Participants at this year’s ECOSOC meeting discussed increasing coordination, accountability and transparency in the U.N.’s approach to the SDGs. In her address, Mohammed stated that to achieve the SDGs would require all countries to “redefine traditional planning, delivery and monitoring.”

Mohammed has a track record of fighting for the environment. She has held positions as the former Minister of the Environment of Nigeria, the founder of the Center for Development Policy Solutions and a professor for the Master’s in Development Practice program at Columbia University’s Earth Institute. Mohammed’s past achievements show her commitment to the SDGs. In her address she said that, “achieving the SDGs is not an option, but an imperative for a safe and secure future of prosperity, opportunity and human rights for all.” The SDGs are an investment in preventing crises from forming out of global challenges like poverty, climate change, environment and hunger.

Mohammed believes that achieving the SDGs will require the U.N. to take more initiative. While the U.N. is actively engaged in efforts to achieve the SDGs, policy and framework has expanded immensely since the creation of the Millennium Development Goals in 2000. For example, the Addis Ababa Action Agenda laid out specific guidelines for implementing the SGDs in 2015, and the Inter-agency Task Force was created in 2016 to analyze progress. Only time will tell what developments will come in the future.