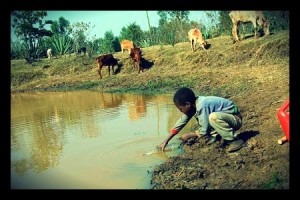 The conflict in Syria, which began in 2011, has left over four million people in need of humanitarian aid. The current shortage of sanitary water supplies is producing grave repercussions on children’s health. UNICEF, coordinating with other organizations including the Syrian Aran Red Crescent and the Ministry of Water Resources, is working to provide sanitary water supplies for over 10 million people.

Access to safe water supplies has grown increasingly difficult as chlorine supplies in Syria have significantly declined. Shortage of clean water greatly increases the risk of contracting water-borne diseases, including diarrhea. The effects are most detrimental to children, whose systems are not as able to bear the strain.

On February 3rd, 80 tons of sodium hypochlorite water chlorination supplies were been delivered to Syria through the Jordanian border. UNICEF will transport 1,000 tons of chlorine to regions across Syria over the coming weeks.

At the same time, the World Health Organization, co-signing an agreement with Saudi Arabia, will donate medicines and medical equipments worth $2.1 million, which will assist over 3 million people and last the period of a year.

Relieving the shortage of medicines, waste management, and the lack of clean water supplies are the three foremost steps to humanitarian aid in Syria; the international community has pledged more than $1.5 billion for this cause.