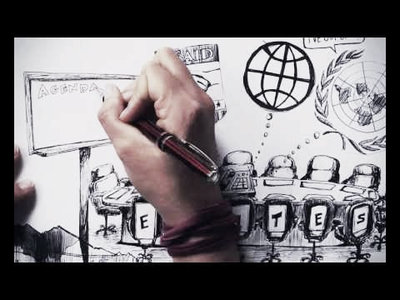 The Global Poverty Project was founded by Ananya Roy, a professor of city and regional planning at Berkeley, Tara Graham, an International and Area Studies lecturer and digital media expert and Abby VanMuijen, an artist with the goal of spreading the curriculum of Berkeley University’s most popular minor, Global Poverty and Practice. The three UCal alumni are utilizing digital media and twitter to create a multilayered broadly accessible curriculum that they call critical thinking + improv art + new media. This creative curriculum is being used to spread knowledge about global poverty beyond the classroom.

A project is a new approach to traditional online education that is sweeping the world. While the traditional method of online education tends to simply stick a video recorder in a classroom, the Global Poverty Project seeks to create numerous forms of media and material for students to utilize as a whole or in parts. Eventually, there will be a textbook that utilizes matrix barcode technology that will link to other related information. Each video that is posted also links to useful sites and information. By generating discussions on Twitter, Roy’s classroom, already full with 600 pupils, has expanded, potentially exponentially, and has become a place where students, people on campus and anyone in the world can exchange ideas.

More than creating a groundbreaking approach to online education, Roy, Graham, and VaMuijen are looking to create new and interesting internet videos that spark discussion and critical thinking.“Most of them, I think, are really patronizing and oversimplify the very complex aspects of poverty action. They’re a call to action, but they don’t necessarily explore all the political and ethical issues that smart young people know are at stake,” said Roy about most internet videos that attempt to address poverty.

Each video starts with a question and offers a scholarly argument for a way of thinking about it. VanMuijen then takes video to a whole other level with visual note-taking and creates the videos. Like the minor itself, the videos are framed to encourage thinking about solutions to poverty that steer clear of what Roy sees as two extremes: “The hubris of benevolence, young Americans thinking ‘I’m going to solve poverty during my alternative spring break,’ and the paralysis of cynicism, which we have a lot of at Berkeley, really smart kids who know how to critique everything in the world but they’re not really sure what to do after that critique.” Later, the project, new media, curriculum, and critical thinking about global poverty come together. While Roy lectures, the Twitter feed is projected behind her in the classroom and the videos are being played and igniting discussion all over the world.