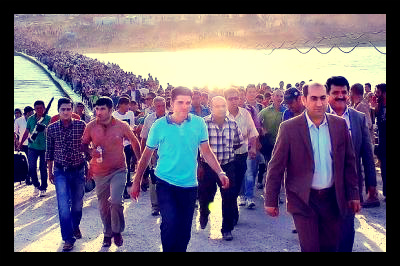 CNN reports that the U.S. only accepted 30,000 Syrian refugees this fiscal year. Over the past three years, civil war has claimed the lives of 50,000 Syrians and produced 2.3 million refugees, half of them children.  The United Nations High Commission for Refugees wants to settle 30,000 of these people this year.

Yet, in the past, the United States has led the world in resettlement and humanitarian efforts.

Some 700,000 Syrian refugees are residing in Turkey. While 200,000 of these are being housed in 21 refugee camps, the remainder have found shelter in towns and cities.

While these countries have been generous, they do not have the space or resources to house this number of refugees and are beginning to see a rise in social and economic tensions. Schools and hospitals are running out of space and incomes have been dropping as residents compete for work.

The U.S. Department of State and USAID have been major sources of funding for humanitarian programs, providing basic necessities such as food, water, tents and medical supplies.

The United States has provided $300 million to Jordan since 2012. It has helped the country to expand its social services to be able to house Syrian refugees, for example 5 schools were built and 62 others were expanded.

However the U.S. is still lagging behind other countries in resettlement. Since the beginning of the Syrian civil war only 90 Syrians have found asylum in the United States. In contrast, Sweden has accepted 14,700 refugees and Germany has accepted 18,000.

Both Senator Dick Durbin and Senator Lindsay Graham are pushing for immigration reform that will allow for the acceptance of more Syrian refugees into the U.S.