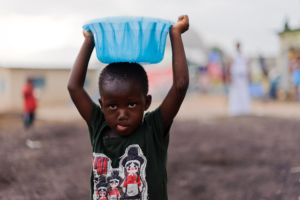 Many countries in Africa are still experiencing problems with disease, poverty and starvation. However, many people and organizations with the tools to help, have reached out to lend a hand. Even large American corporations such as Coca-Cola and Chevron are doing what they can to help. These companies see an opportunity to help struggling nations, that opportunity being that if these companies’ efforts succeed then Africans will no longer need to worry about these particular issues again, and could potentially become customers. Listed below are some examples of how U.S. companies are helping alleviate poverty in Africa.

In 2009, the Coca-Cola Company launched RAIN: The Replenish Africa Initiative, a program with the express purpose of bringing fresh drinking water to Africa’s poor. Since the initiative’s start, they have done work in 35 of the 55 total African countries. The program is making positive change through things like building sustainable communities, catalyzing investment in access to clean water, improving both water and sanitation access for school children and replenishing more than 2 billion liters of water back to communities and the surrounding nature. Coca-Cola’s $30 million investment paired with an additional $40+ million from their over 140 partners, looks to continue their work of bringing clean drinking water to Africa.

Chevron has been a corporation that has shown exactly how U.S. companies can help alleviate poverty in Africa over the years through multiple donations and poverty-reducing initiatives. One of these examples includes a $50 million to the Niger Delta Partnership Initiative (NDPI), an organization that focuses on improving socio-economic conditions to the more than 30 million people living in Niger’s delta region. With Chevron’s help, the organization has been able to help nearly 4,000 people raise their annual income by 92 percent in various agricultural industries. Chevron has also made huge progress combating Africa’s HIV/AIDS epidemic by donating over $60 million since 2008. With help from Chevron’s partnerships with organizations such as Pact, Born Africa Free and The Global Fund, they have made positive changes in reducing mother-to-child transmission of the virus.

In 2008, the famous cereal giant, General Mills, launched the Partners in Food Solutions. A nonprofit with the goal of bringing improved food production as well as food processing expertise to small and medium-sized food processors in African nations. Since its establishment, the organization has helped with food production in the African countries of Cote D’Ivoire, Ethiopia, Ghana, Kenya, Malawi, Rwanda, Tanzania, Uganda and Zambia. The organization has also gained the support of other major U.S. companies such as Hershey’s and Cargill to further increase their influence and accomplish feats such as strengthening food security across the continent, improving the nutrition of African grown and produced foods and increasing economic development by expanding the competitiveness of Africa’s food processing sector.

These examples of how U.S. companies are helping to alleviate poverty in Africa show a growing trend by big businesses to invest in struggling communities. Not only because of the positive philanthropic impact behind their multi-million-dollar donations, but also because of the huge potential a healthy and prosperous Africa could bring to them as consumers. No matter the reason behind the initiative, however, the progress made by these seemingly unconventional donors has brought undeniable change to millions struggling to maintain basic necessities that others often take for granted.