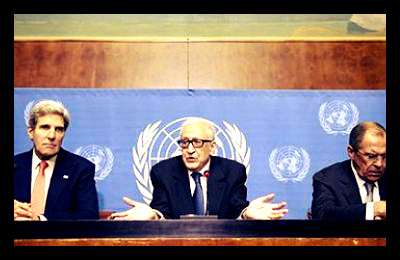 Syria has been in a horrific war for the past three years, but maybe just maybe it will all come to end through what is being called the Geneva II Communique.

The UN, U.S. and Russia, have been trying to convince parities of the Syrian conflict to attend The Geneva II Communique for months. Last week both sides to the Syrian conflict finally agreed to sit down and figure out a solution to end the bloodshed in Syria. The conflicting parties are meeting with United Nations officials and speaking only through a mediator.

“After nearly three painful years of conflict and suffering in Syria, today is a day of fragile but real hope.” These are the words of United Nations Secretary General Ban Ki- moon, hoping resolution is in sight.

So far, agreement to release women and children from the war torn town of Homs has been reached. The UN is also requesting the release of the remainder of the citizens, including men. Humanitarian aid will also be sent in to the starving citizens once an agreement is made to do so. There are also talks about the release of the detainees and prisoners being held on each opposing side.

The UN is trying to implement the Geneva I communique aka as (transitional government) which was written in June of the 2013. According to BBC, the communique translates to the following:

U.S. Secretary of State John Kerry believes a government transition is the only thing left to do or else Syria “heads closer to an abyss.”

“Bashar al-Assad will not be part of that transition government,” states Kerry. There is no way, no way possible in the imagination, that the man, who has led the brutal response to his own people, could regain the legitimacy to govern.”

The Syrian war started three long years ago when rebel groups began protesting against the inhumane leadership of the Syrian government and shouted for Al -Assad to be overthrown. The protesting then turned to bloodshed between these groups and war broke out.  Thus far, over 100,000 people have been killed and over 9 million people have fled their homes for shelter in neighboring countries.

Millions of people are still residing in the city; being held in turmoil. The citizens are literally starving to death with no access to food. Some have even gotten to the point of eating grass and weeds because no food is available. Medical supplies and medicine are also running out for the citizens. All people can do is wait to either die or be saved. By whom, no one knows.

An agreement between these opposing parties must come to an end quickly with imminent improvement of the lives of the Syrian people the first and only priority.<