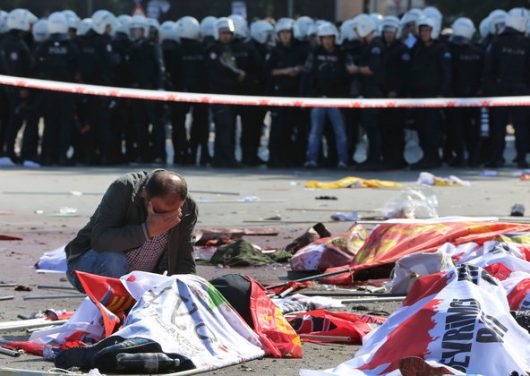 Turkey’s tourism industry is vital to the country’s economy. After declines in the past two years, Turkey now reports an increased number of foreign visitors again.

Domestic and international political tensions dramatically intensified the downward trend. Numerous terrorist attacks in late 2015 and throughout 2016, which were partly attributed to Kurdish militants and partly to ISIS, claimed hundreds of lives, including many foreigners.

In July 2016, a bloody military coup against the government of Turkish President Tayyip Erdogan was quelled but led to the declaration of a state of emergency by the government that persists until this day. The situation has been used to justify an extensive crackdown on civil servants and civil society, including the closure of media outlets and non-governmental organizations and the detention of journalists, members of the parliament and human rights activists. The violence and political instability left tourists worried about their safety in Turkey.

The neglect of human rights and democratic values has also chipped away from the image of the country’s leader in Europe – an unfavorable image only further deteriorated by the “war of words” he has been waging with EU leaders. Recently, Erdogan has repeatedly made negative headlines throughout Europe, not only with his domestic policies but also with his hostility toward several members of the European Union, whom he accused of Nazism and fascism, for instance.

Visitor numbers from Russia also saw a steep decline in 2016. A diplomatic crisis had emerged between the countries, after Turkey shot down a Russian military jet close to the Syrian border in November 2015. The Russian government reacted by banning charter flights to Turkey and barring tour companies from selling deals to Turkey. Prior to the crisis, Russians had made up the second-largest group of visitors to the country, generating $34 billion in revenue in 2014 by themselves.

According to the Istanbul Culture and Tourism Directorate, the numerous crises amounted to a total drop of 25.9% of visitors in 2016 compared to the previous year, amounting to losses of billions of dollars in the industry, which is vital to the country’s economy: a report from the World Travel & Tourism Council stated that the travel and tourism sectors had generated 12% of Turkey’s 2014 GDP, based on its direct, indirect and induced GDP impact.

However, last year, many beds, beaches and restaurants stayed empty during the summer months, which in turn forced many businesses to drastically lower their prices. This tourism crisis threatens the livelihood of the eight percent of the workforce employed in Turkey’s tourism industry, as well as other businesses dependent on foreign consumers.

After the Russian government’s crackdown on travel to Turkey has ended, Russian tourists now flock back into the country. In April 2017, visitor numbers finally increased again compared to April 2016, but they still remained lower than pre-crisis levels.

Additionally, Turkish hoteliers hope to make up for some of their losses with domestic tourism, but visitors from within Turkey tend to spend less than tourists from Europe or the U.S. The German Tagesschau quotes a hotel operator in saying: “It is not only about increasing the number of visitors and filling up hotels. If the room rates remain low, our problems remain, too.” Despite recently increasing revenues, a challenging time still lies ahead for Turkey’s tourism industry.