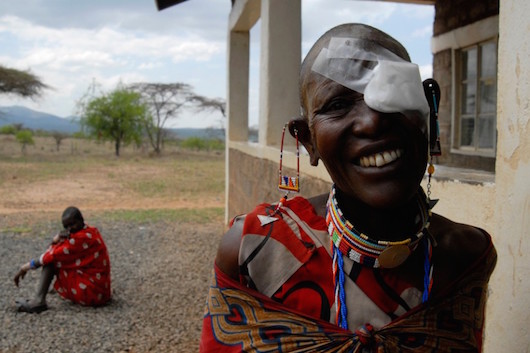 According to the International Trachoma Initiative (ITI), trachoma remains the world’s leading infectious cause of blindness. Pfizer Inc., along with several partners has been working to provide critical trachoma treatment, particularly for patients in developing countries.

Trachoma is an infectious disease caused by bacteria. It is spread through contact with eye discharge from an infected person – via hands, towels, sheets and in some cases, eye-seeking flies. The infection thrives in areas with poor sanitation and limited access to water for personal hygiene.

Without treatment, trachoma develops into a condition called trichiasis. Trichiasis causes the upper eyelids to turn inwards and scrape the eyeball, a painful condition that eventually leads to blindness.

In 2014, the World Health Organization (WHO) estimated that 232 million people were at risk of developing trachoma. Studies indicate that trachoma is endemic in 51 countries with more than 80 percent of sufferers concentrated in 14 countries.

To help combat the spread of trachoma, Pfizer along with ITI and the International Coalition for Trachoma Control announced the corporation’s 500 millionth donation of the tablet Zithromax, a trachoma treatment antibiotic used in countries across Africa and Asia.

The partners are working together as part of an Alliance for the Global Elimination of Trachoma by 2020 (GET 2020) led by the WHO. The Alliance is an expansive collaboration of more than 100 governments, non-governmental organizations and private sector partners.

Together the group has implemented a WHO recommended strategy called SAFE:

Surgery to treat the blinding stage of the disease

ITI pointed out trachoma was once endemic in Europe and the United States. Before the use of antibiotics, trachoma disappeared due to improved living standards.

Today, antibiotic treatment provides a short-term cure, especially when the whole community is treated. However, reinfection can occur, typically within six months if hygiene and the environment don’t improve. For this reason, it is essential that the full SAFE strategy is in place in trachoma-endemic communities.

Paul Emerson, the Director for ITI said, “Trachoma traditionally affects the people at the end of the road, they’re the forgotten people, they are people with a very little political voice. Because trachoma is a hidden disease it is very difficult for people to care. Well, we do care. And we want to reach all of those people.”